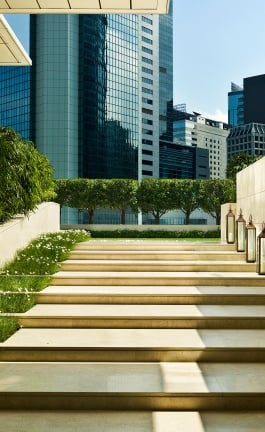 The Upper House: An Upward Journey Above Hong Kong From the walls of dilapidated houses in Athens to the walls of the Frieze Art Fair in London, Greek artist HOPE picks up the ruins of his homeland’s glorious past and bestows a new meaning upon them through his work. When he first appeared on the Athenian street-art scene, his work was received as a somewhat ironic, hopeful message by his homeland’s crisis-struck society. His current output however, has gone on to spread across a wide spectrum of disciplines, from visual art and exhibitions to music composition, performance art and video. Known for his signature wall murals (grotesques made of unsettling collages of ancient art and contemporary images, creating a sense of historical short-circuit), he achieves the same aesthetic result in his public performances which combine aggressive media art with self-conscious, slow ritualistic actions. This religious fastidiousness, combined with a sacrilegious mix of past and present, the secular and the sacred, can be read as a sarcastic comment on the ways in which we create systems of ideals, rules, symmetry and order. How flexible these systems really are, and to what extent they can be shaken before collapsing into beautiful ruins, were just some of the issues that we had the unique opportunity to discuss with HOPE, whilst finding out a whole lot more about his artistic practice, his philosophy and his future plans.

You first became known through your street art; in fact, you were one of the first artists to use large stickers on the streets of Athens. What actually made you get involved with street art in the first place?

HOPE: What interests me about street art and public art, in general, is that it can exist as a forum/platform for dialogue. We live and think within the public space. When you place an artwork in the public domain, you’re interacting with the public. This makes you think about the public order. You’re given the opportunity to express your opinion politically and sociologically through a work, the longevity of which is determined according to the public opinion… But the main reason I got involved in street art was the feeling that I was creating an anti-monument, a new kind of creative model which escapes private places. Sometimes, when public art is effective, it can even change the world.

What kind of techniques and media do you use?

HOPE: I don’t follow any specific technique. I am inspired by something different each time.

Your artistic ''vocabulary'' mainly includes imagery from archaeological findings, such as statues, statuettes, masks etc. What is the relationship between these images and present-day reality for you?

HOPE: My works are marked by mythology. They are sculptural images inspired from the past with a new aesthetic rule.

Now that your work is now being shown in galleries and exhibitions around the world, how do you feel about the fact that you are now a part of the more institutionalised world of galleries and the art market as a whole? Has this affected your work in any way?

HOPE: I just explore the exhibition spaces and perceive them as a reflection of who I am in a public space. It’s a symbiotic relationship between public art and the exhibited objects inside a room.

Lately a large part of your work has become performance-based, and is particularly ritualistic and static in nature. What creative process do you follow when you put these performances together, and what part do you play in them?

HOPE: It’s a transformation of experience into artwork. The body is just another object, and I always treat it like that. In a performance you no longer breathe – you leave your body back at home. You become the performance. Although sometimes I don’t even participate in my performance-works, I’m still present in their expressive language, as I set them up, as well as witness them.

For some people, the artist is something like a shaman, with a duty to heal and guide the people around him. To what degree is this belief part of your own philosophy?

HOPE: For me, the artist does not project the image of a ‘soul doctor’ so to speak. Art is more of a language game. My involvement in art is to project my experiences in this world and my collection of curiosities.

You’re currently preparing a new exhibition at The Breeder Gallery in Athens, in which you are participating not only as a curator, but also as an artist. What is the concept behind the exhibition? What will it contain or explore?

HOPE: The group exhibition titled NOTEMPLE is a collection of artworks by a big group of artists including Miltos Manetas, Kon Trubkovich, Palle Torson, Tobias Bernstrup, Kristin Eketoft, Spyros Staveris, Marc Charpentier MCPM, Vassilis H, Nikos Paleologos, Anthimos Ntagkas and Kandis Williams. The exhibition is an experiment in creating an alternative, dialectic logic, drawing on elements that are found on our own cultural terrain. In the exhibition, we focus mainly on the aesthetics of a temple, as we aspire towards a new poetic reconciliation between many different elements. The aim is to create an exhibition - like a pseudo-temple which is meant to be destroyed; after all, most temples look good only when they’re in ruins.

What else do you have in store for the future? What can we expect from HOPE in the coming months?

[YatzerTip]: The exhibition NOTEMPLE, curated by HOPE, will be open to the public from 7 November 2013 to 12 January 2014, at The Breeder Gallery in Athens, Greece.