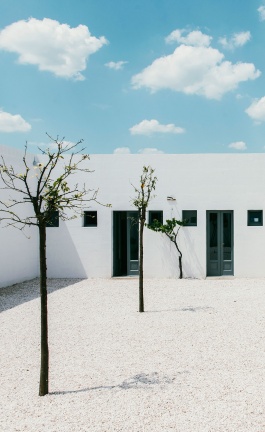 Grace, peace and a tacit understanding of the mysteries of the world seem to permeate the elegant photographic work of Italian-Senegalese visual artist Maïmouna Guerresi. Born Patrizia Guerresi, she converted to Sufi Islam at the age of 40; being the most mystical side of Islam, Sufism has proven to be a source of personal growth and artistic inspiration for Guerresi, since she admits that “it’s impossible for her to separate her most intimate thoughts from her artistic expression.” A strong believer in humanity’s common essence and destiny, Guerresi uses symbolism in order to reach the metaphysical, with religious Islamic symbols playing a big part in her iconography. In spite of her busy schedule, the artist generously accepted to give an interview to Yatzer and reveal the secret meanings behind her photographs, her connection to mysticism and her opinion on the heated debate in Europe about the hijab.

We could say that there’s a sense of universality in your work, a sense that all humanity is one big tribe. Would you agree with this reading of your work? Is that something you believe in personally?

Sure, the intention behind my work is to communicate a universal spirituality and that every human being has his or her own personal internal universe that can be uncovered and cultivated. The roads to this objective are infinite and diverse; one of them is the Murid Sufism path, which I have chosen.

There is a Sufi phrase that I particularly love which states ‘We Sufi are like compasses, we have a foot in Islam and with the other we circulate around all religions’.

Tell us a bit about your Giants series. How did you come up with the costumes for this series and what is the story behind these photographs? Are these real people or imaginary characters?

In my Giants series I was inspired by mystical Muslim subjects and I tried to interpret their greatness and spiritual beauty but not their actual appearance. In fact, I photographed ordinary people and members of my family, depicting them as unreal, metaphysical beings draped in robes which are like architectural structures signifying their form, faces and hands. They're like ancient icons: whilst their bodies are as empty as dark and mysterious caves, they create new, unknown spaces that are part of an infinite universe.

There’s a lot of controversy in Europe at the moment about the hijab and whether Muslim women should be allowed to cover themselves in public. Can you tell us what the connection between the hijab and Islamic spiritualism is, and what your own personal opinion on this issue?

The hijab should be considered for what it really is, as a religious accessory and not as the essential pillar for Muslim women. In any case, it being considered a symbol of belonging to the Islamic faith, greatly annoys the West because it [the West] has lost a great deal of faith throughout the years.

Anyway, my interpretation of the veil is primarily symbolic and dreamlike. Sometimes it deviates from specific cultural or religious references; my veiled figures symbolise the sacredness of the body, like a temple of the soul —following a signature style that is reminiscent of a number of traditional Madonnas in classical Italian art by Piero della Francesca and Antonello da Messina, but is also common in Muslim women. Above all, I'm interested in investigating the infinite possibilities of women's spirituality, across all geographies, cultures and eras, to visually narrate its discomforts and its charms, as well as the eternal value of diversity.

Apart from clothing and headscarves, there are other recurring symbols in your work, like the contrast of black and white, the Sufi hat, face-painting... What do these symbols mean for you and why do you keep coming back to them?

In my works I often use black and white. Black for me is something unknown that symbolises the infinite, white instead can be understood as a metaphor of light but also as a motherly blessing. So the symbols, objects, artefacts, costumes, hats, calligraphy, and signs that are repeated in my work, are part of my artistic language, that through metaphors and concepts such as suspension, levitation and the infinite, communicate a sense of both formal and psychological balance.

I love the sense of community and secrecy in your M-Eating series. What is the concept behind these images, and if these people are eating, what are they eating exactly?

In the photo series that I titled M-eating, I tried to deepen the ongoing conflict between aggregation and isolation. The characters that I photographed are shown from behind or from the side and are then placed together in a banquet setting. The subjects have a deep or distracted gaze even though the scene is one of aggregation. On the table there’s no food, only a few objects... a plate, a pitcher of water, a tyre —or other objects, like old remnants of war, which, in this context, lose their original meaning of menace and acquire an everyday, decorative aspect. The meeting at the table becomes an occasion to reflect on the contemporary human and his/her relationship with society.

You currently live in Senegal. What is the best thing about living there and what similarities do you see between West Africa and Europe?

I’m actually currently based in Italy. After my solo exhibition at Matèria Gallery in Rome [June 2016], I flew to America for two other exhibitions, one at the LACMA Museum in Los Angeles and the other at the Stux Gallery in New York. I am now getting ready for the exhibition/event ‘Dreamers’, set to open in early October at the Museum Ettore Fico in Turin (MEF).

After that, I will be going to the yearly 1:54 Contemporary Art Fair in London where my work is exhibited by Mariane Ibrahim Gallery from Seattle. As soon as my European commitments permit, I will return to Senegal where, although the city of Dakar is very chaotic, the art world there follows logics that are very similar to western ones. The return to my family, the visiting of religious personas and the calm of the small towns makes everything change, placing me in harmony with the African mood and state of mind.