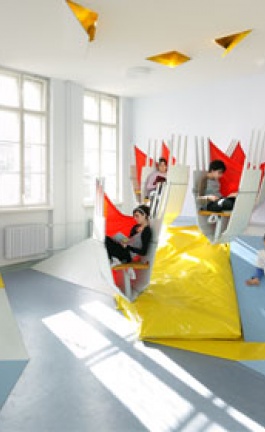 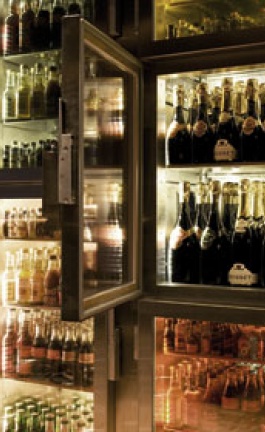 Since the day that we discovered the Tokyo based design company, CURIOSITY through the unforgettable TOKYO WONDER exhibition which took place during the Milan design week in 2008, something changed in our minds concerning the way we understand the balance of light. We have kept our readers updated about the latest projects of CURIOSITY, but when we learned that the French architect and interior designer, president of CURIOSITY, Mr.Nicolas Gwenael was coming to Athens for a lecture, we didn’t miss the opportunity to learn more about his future plans, his design experience and his design thoughts. Something that we knew it would outstand us.
Expressing its admiration once more to modern design, Megaron Plus invited us to this unique lecture which took place on April 29th 2009 at the Athens Concert Hall and was prefaced by Greek architect Memos Philippidis. The event was sponsored by DOMES International Review of Architecture.

WHAT WILL NEVER BE FORGOTTEN from the lecture:
• “I totally believe in the Essence of Japanese Beauty – WABI SABI SUKI*”
• His privatefamily house in Tokyo, the famous C-1 house, is a prototype of Architecture in Motion.
• "We must design from the seen".
• Re-inventing the elements of Nature
• Light is the key factor of the space.

Born in France in 1966 with origins from Bretagne, Nicolas Gwenael received his bachelor of arts degree in Interior Design from the Ecole Supèrieure d'Art Graphique [E.S.A.G] in Paris in 1988 and in 1991 he completed an MA on Industrial Design at the Royal College of Arts in London [RCA]. In 2004 he continued his postgraduate studies with an MA of Arts Degree once again from E.S.AG. in Paris.
In 1991 he began working freelance in Japan and seven years later he established the design company Curiosity in Tokyo, together with the Japanese marketing expert Reiko Miyamoto. Very soon their office acquired worldwide reputation having important clients, such as Issey Miyake and companies like Nintendo, Pioneer and Tag Heuer. Nowadays, Miyamoto is the Director of Curiosity and Gwenael is the President of the company, permanently living in Japan.

The French designer became known not only for his design of trade spaces and houses, but also for furniture, creative objects and the setting up of exhibition spaces. His personal artistic inspiration and creation, as well as his multiple interest in graphics and interior design made Curiosity one of the most important design offices worldwide.

Curiosity emphasized on minimal spaces, lighting and “movement” and designed the Issey Miyake boutique and the Tag Heuer store in NYC . His recent works include the architectural designs of houses C-1 and C-2 in Tokyo which Agape purchased the designs for the sanitary ware that were custom designed by Mr. Gwenael for his private residence C-1. Another project which brings in reality the form ‘think outside the box’ is the artistic design of the LEXUS RX Museum in Tokyo.

Gwenael has been awarded numerous times; twice in 2007 by the Japanese Society of Commercial Space Designers [JCD], three times by the Display Design Awards in 2005 & 2006, as well as the IF Design Award in 2003 for the Miyake and Tag Heuer stores, the Le Feu D’Issey perfume and spray and the Boomerang couch.

*Extract from WABI SABI SUKI :The Essence of Japanese Beauty – by Itoh Teiji

Wabi: Tranquil Simplicity The refined and elegant simplicity achieved by bringing out the natural colors, forms, and textures inherent in materials such as wood straw, bamboo, clay, and stone, as well as in artifacts crafted from them like earthenware, tile, handmade paper, and lacquerware, and in textile fibers like hemp, cotton, or silk – this is the core of wabi. Wabi may describe beauty in nature untouched by human hands, or it may emerge from human attempts to draw out the distinctive beauty of materials. While eschewing decoration, contrivance, or showiness, wabi treads the fine and precarious line between beauty and shabbiness. To discover wabi, one must have an eye for the beautiful, yet it is not an aesthetic understood by the Japanese of old, but a quality that can be recognized by anyone, anywhere who is discriminating and sensitive to beauty.

Sabi: Patina of Age Beauty that treasures the passage of time is sabi, echoing the original meaning of the word: rust or patina. Objects or constructions created from organic materials and used in daily life are of course beautiful when they are brand new. But sabi describes the new and different phases of beauty that evolve in the course of their use and enjoyment, and the conviction that the aesthetic values of things is not diminished by time, but enhanced. The wear and tear of daily use, lovingly repaired and attended to, does not detract, but adds new beauty and aesthetic depth. Indeed, sabi is at its ultimate when age and wear bring a new thing to the very threshold of its demise. Appreciation of sabi confirms the natural cycle of organic life – that what is created from the earth finally returns to the earth and that nothing is ever complete. Sabi is true to the natural cycle of birth and rebirth.

Suki: Subtle Elegance Originally expressing attraction, fascination and curiosity, suki is aesthetic adventure beyond conventional standards, delight in the unusual, curious or idiosyncratic. Initially, suki seems to have expressed an idea of beauty that was heretical and unorthodox. The shogun Ashikaga Yoshinori (1399-1441) was a patron of the arts known for his revolt against old and established aesthetic rules. His salon was receptive to bold and new ideas that were to become firmly established in the sixteenth century as what we might describe as “subtle elegance”. Many today are devotees of suki, the pursuit of beauty in unconventional forms and guises, but their search continues to be faithful to the quality of subtle elegance, which circumscribes the ageless essence of suki.