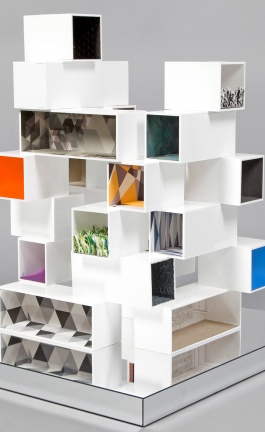 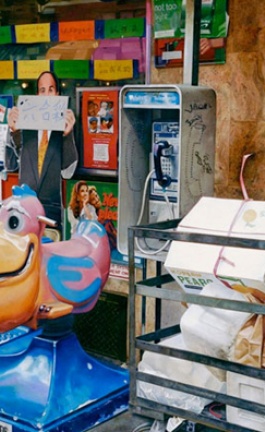 Since 2011, Cypriot media-artist Theo-Mass has been methodically infiltrating the art world, utilising what he has identified as our urban culture’s largest powers: money, fashion and the media. In 2012, he took London by storm with a series of ''creative attacks'' which led up to a cover story for Dazed & Confused magazine and the beginning of an on-going collaboration.  Since then, he has been all over the world, to and from destinations as far flung as Los Angeles and Vienna, advancing his master-plan for world domination.  And although he has been hailed as the art-world’s first superhero, don’t let yourself be deceived by the glamour and the art: Theo-Mass is not here to save anyone, but to inspire. We had a talk with him about his work, his methods, as well as his ambitious upcoming plans.

Just to get the ball rolling, can you tell me, in a few words, how you came up with the idea of a superhero that goes out into the world to accomplish things?

From early on, I realised that the goals and standards I had set for myself were really high, that achieving these goals was almost like a dream for me – they seemed so difficult that the only way to achieve them was with superpowers. So on a conceptual level, the reason I became a superhero was to acquire these superpowers and enable myself to achieve those things I’d always wanted to do. That’s how the whole concept began, with the aim of erasing my real self completely and creating a new character in order to begin from zero. And that’s how Theo-Mass was born.

What superpowers did you use as your project evolved?

Basically, when I sat down to set the ground rules for this project, and combine the idea of a superhero with my own work, I came to the realisation that the superpowers of our world today are fashion, media and money. The first major episode in Theo-Mass’s storyline was titled ''My Power Is Beyond Your Understanding'' which was an exploration of these superpowers: I printed my own money (''Theo-Mass dollars''), I established connections with the fashion world through the costumes I wear, in my masks, my headpieces and my collaborations with designers and artists who work within the fashion industry and so on. Then I started collaborating with the media internationally, while publishing my own newspaper, Theo-Mass Times. These three elements are the superpowers I deal with and are part of my work.

The success of your project and the huge response that you’ve received from the media do sort of prove that fashion, money and the media are indeed the big superpowers today.

Exactly. The project was built to attract exactly this kind of attention, I mean the elements of fashion, money and media, all these things... All that was needed was the right moment for these things to come together and for the whole project to receive the necessary publicity and get rolling.

I’ve always used social networks, not only in order to promote my work, but also as tools to create. I’ve been looking into that idea for some time now – the digital coming into the physical, new technologies and the internet, and the evolution these things have seen over the past two or three years... The conceptual framework of the ''#POSTDIGITALISM Part 1'' exhibition was to explore the impact of an image or a piece of text which is distributed on the web or social media sites (like Tumblr, Facebook, Instagram or Twitter) in the physical world. For example, all the words in the #POSTDIGITALISM manifesto which was one of the most important elements of that show, were accompanied by the hashtag symbol (#). When the words accompanied with the hashtag symbol are posted on Instagram for example, you are given the possibility to enter themed image archives. When these same words are printed in paper format however, they no longer function in the same way. Instead, a hybrid language emerges. The same phenomenon appears with a GIF file, with the (@) symbol and so on. What happens when we extract the digital world from the screen to reality? The “#POSTDIGITALISM Part 1” was meant to question that. My upcoming “#POSTDIGITALISM Part 2” will function as the answer to the above question.

We know that you collaborate with fashion designers and photographers etc. to create the concepts and visuals for each one of your episodes. Can you tell me something about the nature of your collaborations? Do you commission things to the individuals you collaborate with or do you source items that are already made?

A little bit of everything… Sometimes a designer might contact me to show me his or her work, sometimes I commission a designer to make something from scratch... Other times I have a joint process with a designer; we put our hands and heads together to make something. All kinds of forms of collaborations take place but all the ideas and the coordination come from me. I believe in collaborations – some people can do things other people can’t.

Portrait of Theo-Mass by Eva Ellersdorfer-Meissnerova for the MuseumsQuartier Wien / quartier21.

You were recently in Vienna for a month for a residency, working on a new work. Can you tell us more about it?

Yeah, I was at the Museums Quartier, for the ''Faceless'' exhibition*. I created a new piece of work which will tour with the exhibition to various countries. My contribution has two elements: one is about #postdigitalism and shows works related to my #POSTDIGITALISM exhibition, and the other is a timeline with unseen material from my appearances, from the preparation of my “creative attacks”… All these ''behind the scenes'' images are part of the exhibition, along with masks, costumes, props and various objects that have been used throughout the project. I wanted to show people the whole process, how I do all this, to show that it’s not just about putting my costume on and going out, that there’s tons of research and preparation behind it.

* The Faceless exhibition at Vienna’s Museums Quartier – featuring a new work by Theo-Mass Lexileictous – will be open through November 24th 2013. For more info, have a look at their website.

And what are you up to now?

I’m working on the new episode, which will take place in Los Angeles next spring, in mid April, which I feel is the most important thing I’ve ever done.

Because it has a lot to say… It’s a continuation of #POSTSIGITALISM basically… It’s titled ''#POSTDIGITALISM II #the mutant returns'', and I believe that it’s the most powerful episode yet. It will involve performances, a solo exhibition, a publication; everything is there, and everything’s very solid… Also on a theoretical level I think it’s very well-built. I see an evolution and that’s really important.

How do you see a theory of #postdigitalism evolving through this ''Part 2''?

I am developing #postdigitalist automatic writing or #promography theory. I define #postdigitalism and set its characteristics in relation to either a piece of text or an artwork. The first sample of #postdigitalist automatic writing comes to life in my upcoming column for SID magazine at the beginning of November. In a few words, #postdigitalism is about creating art resulting from a cross between two diverse realities: that of the physical existence and that of the abstractness of the digital world. I am currently working on the upcoming issue of Theo-Mass Times where I’m putting everything together – it’s going to be an augmented reality publication. After all the research that I’ve conducted, I’ve come to realize that #postdigitalism has a direct link to Surrealism, something that will be clearly explained in the upcoming issue of Theo-Mass Times. All of my upcoming performances and appearances are based on that concept as well, offering my audience a spectacle, something unexpected, adding the element of surprise to everything I’ll be doing: unexpected juxtapositions, nonsense and non sequitur. #When #I #cook #fried eggs #in #the #desert #ants #are #melting clocks #in #my #pipe @theomass / This sentence perfectly describes what #postdigitalism is.

Neither, he’s becoming a #postdigitalist!

[YatzerTip]: Theo-Mass is full of surprises – and there’s an avalanche of exciting new work coming up, even though we’re not allowed to tell! Stay up-to-date with his activity through his facebook page.