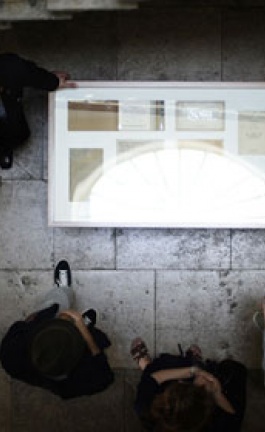 A blessed club in Brussels

From 8 September 2010 until 13 February 2011, the MoMu–Fashion Museum in Antwerp will present a retrospective exhibition of the work of British milliner Stephen Jones. This autumn, Jones celebrates the 30th anniversary of his House, "Stephen Jones Millinery". MoMu will mark that anniversary with an exceptional exhibition. The MoMu–Fashion Museum houses the largest collection of Stephen Jones hats – more than 120 items – outside Great Britain, thanks to a long-term loan by the Antwerp private collectors, Geert Bruloot and Eddy Michiels.

The exhibition Stephen Jones & The Accent of Fashion guides you through the unique world of a hatmaker who has worked with many of the greatest names in the international fashion scene for three decades: Jean Paul Gaultier, Thierry Mugler, Comme des Garçons, Claude Montana, John Galliano, Christian Dior, Azzedine Alaïa,Walter Van Beirendonck, Marc Jacobs, and many more. Stephen Jones plays a unique behind-the-scenes role in fashion because of the unparalleled freedom he is given by designers, allowing his work to influence the image of a collection. Just as accents in language lead to the correct reading and rhythm of a text, Jones’s hats add the appropriate punctuation to a designer’s fashion statement.


As well as Stephen Jones’s numerous collaborations with designers, the exhibition also looks more closely at his work in film, music and photography, his early years in the London of the New Romantics, his unique relationship with fashion icon Anna Piaggi, his design process and the sources of inspiration behind his creations. The exhibition will be made possible with the collaboration of Stephen Jones & Geert Bruloot and the unique catalogue will be published by the Fashion Museum and Lannoo Publishers.