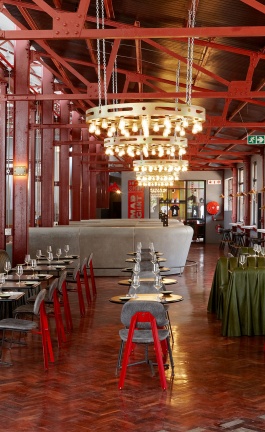 The Incredible Transformation of a Stately Apartment in Barcelona

Jointly organized by New York’s New Museum and the DESTE Foundation for Contemporary Art, in collaboration with Athens’ Benaki Museum, “The Equilibrists” is a group exhibition of 33 Greek and Cypriot artists on the occasion of DESTE’s 33rd anniversary. Fittingly for a foundation that has for the last three decades been the champion of emerging Greek artists, in order to celebrate its past, DESTE looks to the future by selecting a crop of young artists who are all in their mid 20s to mid 30s. Although at first glance their work seems rather heterogeneous, common threads can be discerned in their inquisitiveness and improvisation to explore the way we live now.

Selected by the New Museum’s artistic director, Massimiliano Gioni, and curators, Gary Carrion-Murayari and Helga Christoffersen—who made several trips to artists’ studios in Athens, Thessaloniki, Cyprus, London and Berlin—the featured practitioners have all emerged in a protracted era of deep economic and political turmoil. Working in a variety of mediums, from painting and sculpture to photography and video, and tackling diverse themes from historical memory and cultural identity to urban development and the digital age, they nevertheless exhibit a common determination not to let the crisis define who they are but rather to creatively engage with it in order to establish an equilibrium between hope and despair, the past and the future.

The exhibition opens with Malvina Panagiotidi’s “Ghost Relief” series where she has sculpted the facades of existing buildings that have been abandoned out of paraffin wax. Destined to melt away as their wicks are occasionally lit, they figuratively convey the destructive power of time and neglect. Panagiotidi is one of several mixed media artists in the show that use “lowbrow” materials such as cheap fabrics, plaster, found objects and even debris, presumably as a response to the socioeconomic instability they are experiencing as well as a reflection of the multilayered, tangled world we live in.

Another such artist is Zoë Paul whose wool weavings on vintage fridge grills combine technology with handicraft to touch on the evolution of domestic spaces and society’s interconnectedness, whose poetically titled “The taste of a cosmopolitan shepherd with an excellent long term memory”—a curtain made out of hand-crafted clay beads threaded together to create a Minoan-like figure— is a permeable threshold between the domestic and the public as well as a study on our elusive perception of history. Intriguingly, Zoë’s work has both a digital, pixelated appearance and a resemblance to primitive art, the latter also being descriptive of the work of a few other artists in the show like Dimitris Ameladiotis who makes sculptures of jumbled junk that look like spirit dolls and Zoi Gaitanidou who embroiders canvases with tribal-like figures and symbols.

Other highlights in the exhibition include Orestis Mavroudis’ “Attempt to Fly”, a short video of a man constructing a paradoxical rucksack device with a two-blade propeller and attempting to take off, a bittersweet parable of our human drive to forge ahead against all odds, Giorgos Gerontides’ kinetic installations of discarded objects powered by household fans and Manolis Daskalakis-Lemos’ “Silent Hysteria”, an installation of swallow tanks filled with petroleum that are inspired by Kazimir Malevich’s Suprematist paintings. Similarly to Malevich’s “Black Square” which was conceived as the source of infinite possibilities, Daskalakis-Lemos toys with the idea that the discovery and extraction of oil will jumpstart the moribund Greek economy, though the adjacent image of an oil spill fire suggests a more ominous future.

In the field of photography, Stellios Kallinikou’s “Local Studies”, featuring images of both the northern and the southern parts of Cyprus with a focus on the quotidian rather than the geopolitical, stand out for their magic realism. Similarly uncanny, Petros Efstathiadis’ photographs depict scenes of suburban decay and abandonment that nevertheless turn out to be intriguing compositions resembling DIY totems or altars dedicated to a ghostly deity, whereas Yannis Karpouzis’ “Parallel Crisis” series captures the numbness of a society immobilized by a prolonged depression.

The exhibition comes full circle with Irini Miga’s installation of a three-dimensional drawing of a room that functions, as the artist explains, “as a frame for the shifting relationships between representation, abstraction, and materiality”, echoing, in its ghostly appearance, Panagiotidi’s “Ghost Relief” series.

Rounding up DESTE’s summer exhibition program, Italian artist Roberto Cuoghi has been commissioned to take over the Foundation’s Slaughterhouse art space on the island of Hydra as part of its annual invitation to one artist or group of artists for a site-specific installation. Titled “Putiferio”, which in Latin means "to bring the stink" or “a little taste of hell”, Cuoghi has surrounded the space with ceramic ovens of different shapes and sizes that he used during the exhibition’s opening on June 20th to create a series of ceramic crabs which he then hand-painted using improvised dyes and then scattered throughout the site. The smoke-filled ritual was conceived by the artist as a way to get rid of the wasps that had invaded the Slaughterhouse when he first visited the site, whereas the crab invasion that followed was inspired by the mythological Carcinus, a giant crab that Hera sent to battle Heracles and was later transformed into a constellation; the crustacean-themed event was also inspired by a rare astrological event known as “Strawberry Moon” that occurred on the opening night, whereby during a full moon, the sun enters the Cancer constellation while being directly over the Tropic of Cancer. (To top it all, that particular full moon was also aligned with a supermassive black hole residing at the centre of our galaxy.)

Loaded with such symbolism, Cuoghi’s “small taste of hell” can be said to be both a calamity and a panacea, a tentative man-made equilibrium between entropic chaos and utopian order, and in thus shares the commitment made by “The Equilibrists” at the Benaki Museum to make the best out of the tumultuous time we live in.