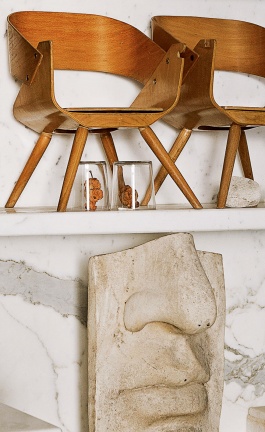 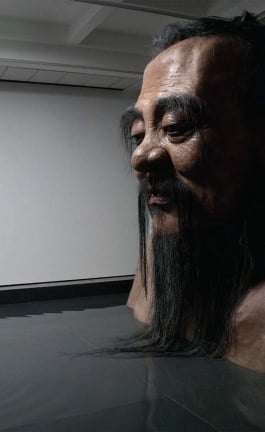 The Fashion World of Jean Paul Gaultier: From the Sidewalk to the Catwalk

The Fashion World of Jean Paul Gaultier: From the Sidewalk to the Catwalk exhibition is a brilliant kaleidoscopic presentation of the famous couturier’s work at the amazing Kunsthal Museum in Rotterdam, The Netherlands (on view until 12 May 2013). Curated by Thierry-Maxime Loriot under the guidance of Gaultier himself, this exhibition is a unique collaboration between the Montreal Museum of Fine Arts and Maison Jean Paul Gaultier in Paris, France. Described as ''a contemporary installation more than a retrospective,'' which is pretty much the case, the exhibition manages to unfold the prolific designer’s multi-faceted output across six distinct galleries, presenting gowns and ensembles from the entire array of his haute couture and ready-to-wear lines, as well as his costumes for film and stage shows. The exhibition deploys advanced audiovisual techniques and inventive scenography (the faces of the models are moving and talking video projections) and is complemented by select fashion photographs, videos, an embroidery workshop, and a 400-page publication dedicated to the designer’s work.

The very first part of the exhibition titled ''The Odyssey of Jean Paul Gaultier'' brings together images of the sea and travel. Here we encounter Gaultier’s emblematic navy stripes – used on fabrics wrapped on trees on the streets of Rotterdam, marking the visitor’s journey from the central station to the museum - a playful wink to Odysseus.

With a couple of designs from his 2008 Mermaid collection, as well as an extensive selection of female garments with Catholic - Christian references (mostly from his 2007 Virgins collection), on the one side of the room we see sailors with their strict horizontal lines, carefree attitude and heavy boots, and on the other side, a chorus of female virgin saints, half-dressed, luscious but fragile, embellished with symbols of martyrdom and sacrifice. The curation playfully mixes up significations of male and female, just as the designer does himself: at first sight it seems a sexist segregation, where the dry straight lines and black-and-white heaviness of the masculine contrast with the wavy embroidered figures and floral floating chiffons of the feminine. But upon closer examination, also taking in the placement of the ‘in-between’ mermaid figures, neither human nor animal, something becomes apparent. On the one hand, the strict navy-stripes motif can be cleverly adapted for luscious female gowns (although admittedly without losing its heaviness), and on the other, an embroidered woman’s dress can transform into a kind of armour.

The idea of fashion as female armour is a persistent theme throughout Gaultier’s work. So it comes as no surprise that it is placed under the spotlight in this exhibition. In a separate gallery space titled The Boudoir, visitors encounter some of Gaultier’s iconic corset designs, whose piercing cone bras and cage-like structures have become synonymous with the designer’s brand name. These embellished sculptural pieces become female suits of armour, emanating power and aggression: Gaultier’s women are not cute playthings wrapped in pink ribbons, but rough, thrusting presences that cut sharply when touched. The curators haven’t missed the opportunity to relate Gaultier’s treatment of the corset with post-feminist discourse, where women can expose their bodies freely and use their nudity as a political weapon further re-iterated on the gallery’s wall where we read that ''far from being an instrument of torture imprisoning women’s bodies, the corset now embodies the new power of the female.''

Although many contemporary feminists would cringe while reading this statement, the curators remain faithful to what seems to be the designer’s own philosophy as seen in his work from the late 80’s and early 90’s. (It’s no coincidence that his designs have been worn on stage by performers like Mylene Farmer, Grace Jones, Madonna and Dana International.) Gaultier turns corsets from hidden underwear (considered even today as the most private pieces of clothing) to impressively adorned couture, meant to be worn in public. The corset is thus supposed to become a symbol of female power and liberation, as it emerges from the boudoir, out onto the street, through over-emphasising the bodily characteristics of the female sex, particularly the breasts. Gaultier succeeds in making a bold statement about this ''coming out,'' simply through the painstakingly detailed work seen on his corset designs, some of which took hundreds of hours to complete. The mere fact that so much effort has been put into decorating a piece of underwear is proof enough that this is no longer mere underwear but something meant to be seen, and it implies that the person who can wear this in public is indeed a person that doesn’t feel threatened or repressed in any way.