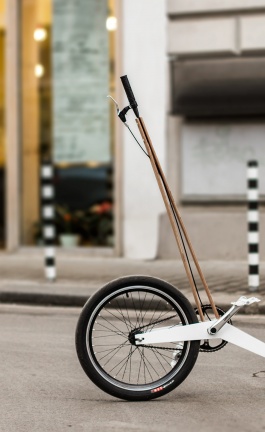 Running On Air: The Halfbike Tricycle By Design Lab Kolelinia

The Weather Diaries: A Book, An Exhibition And A Video Documentary Celebrati...

''Enigmatic, magical, [retaining] aura and tradition as inherent elements of the artisan’s creative and life processes.'' In these words, Matthias Wagner K, the Director of Frankfurt’s Museum Angewandte Kunst, refers to the elements (more specifically, the materials) pivotal to the fashion of the Nordic Islands. Incidentally, or perhaps not at all, these very words could also serve as a particularly apt description of the recent tome by acclaimed photographic duo Cooper & Gorfer dedicated to the roots of the fashion and design traditions of the three West Nordic countries, namely Iceland, Greenland and The Faroe Islands. Titled ‘The Weather Diaries’, the truly enthralling Gestalten’s publication coincides with this year’s edition of the Nordic Fashion Biennale {Norræna húsið} which will be held at the aforementioned Museum Angewandte Kunst in Frankfurt later this month, and which Cooper & Gorfer have been invited to curate.

Known for their otherworldly, poetic and somewhat nostalgic imagery which frequently references the aesthetics of traditional 18th and 19th painting, in ‘The Weather Diaries’ Sarah Cooper and Nina Gorfer have combined their unique photographic style with the sombre, and at times fantastical scenery of the North with moody yet undeniably wondrous results. The resulting portfolio showcases the works of both young and established Nordic designers and artists such as Mundi, Shoplifter, Jör By Guðmundur Jörundsson, Steinnun, Barbara í Gongini, Gudrun & Gudrun, Bibi Chemnitz, Nikolai Kristensen, and Najannguaq Davidsen Lennert, Kría, Jessie Kleeman and Rammatik. Additionally, the book, published by the Berlin-based Gestalten, also features a number of insightful essays on the Nordic Countries’ relationship with clothing and fashion, as well as a collection of interviews with the featured creatives. The titular weather diaries also feature in the book as a series of actual diary excerpts which date back to 1975. Written in a north Icelandic town Akureyri by Baldur Helgi Kristjánsson, the sparse yet personable memories are accompanied by a series of beautiful landscape photographs, again by Cooper & Gorfer.

So for those of you who happen to find themselves in Frankfurt in the upcoming months, ‘The Weather Diaries’ exhibition dedicated to the photographic works presented in the book will open, along with the Nordic Fashion Biennale this coming Friday (21 March 2014) and will remain on show until 22 June 2014.