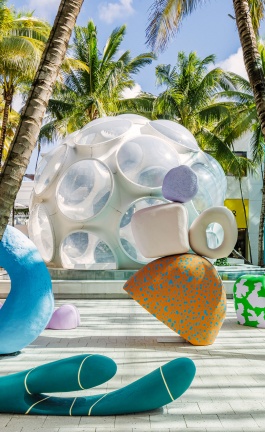 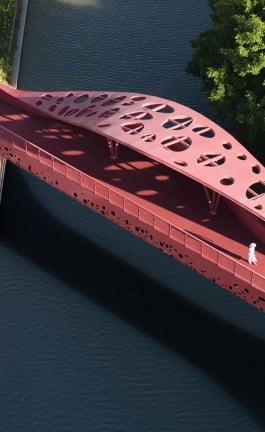 Frieze Founders Draw Inspiration from Alice B. Toklas' Storied Life for their...

Located within an iconic Brutalist building in central London, Toklas, a new restaurant, bakery and grocery store stands out among the latest arrivals in the city’s hospitality scene as much for its unpretentious yet sophisticated Mediterranean menu as for its restrained elegance and culture-minded inspiration. The brainchild of the founders of Frieze magazine and art fairs Amanda Sharp and Matthew Slotover, the venture is named after American author Alice B. Toklas who, together with her life partner Gertrude Stein, turned their pre-war Paris apartment into a modern art salon. By interweaving vintage and contemporary elements, British designer Stafford Schmool has subtly channelled the avant-garde spirit of Toklas and Stein’s artists and writers-packed soirees to create Toklas’ low-key, charming and genial environment.

As stalwart members of the Parisian avant-garde, Toklas and Stein regularly hosted French intellectuals like Guillaume Apollinaire, expatriate American writers, such as Ernest Hemingway and F. Scott Fitzgerald, and upcoming painters like Picasso, Matisse, and Braque, whose works hung on the couple’s art-filled walls alongside paintings by Cézanne, Renoir, Manet, Gauguin and Toulouse-Lautrec – in effect turning their apartment at 27 Rue de Fleurus into the world’s first modern art museum. Good company needs good food and Toklas also gained acclaim for her gastronomic skills. As culinary expert James Beard has said, "Alice was one of the really great cooks of all time", further explaining how Toklas "went all over Paris to find the right ingredients for her meals”, a creative undertaking that culminated in her autobiographical “The Alice B. Toklas Cook Book”, one of the bestselling cookbooks of all time published by Harper in 1954.

Inspired by the confluence of art and gastronomy in Toklas’ life, Sharp and Slotover couldn’t have picked a more fitting venue for their art salon-inspired hospitality venture: the restaurant itself is set within 180 The Strand, a multipurpose cultural venue that hosts art exhibitions and events as well as the likes of creative brands such as Dazed Media, The Vinyl Factory and FACT magazine.

Exposed concrete pillars and wall sections coyly attesting to the building’s brutalist heritage are juxtaposed with the reclaimed parquet floor, green leather banquettes and vintage chairs by modernist Danish designer Børge Mogensen whose simplicity and versatility earned them the nickname The People’s Chair. Complemented by reclaimed iroko table tops and bespoke LED pendants that Stafford created based on a 1960s design, the mid-century-inflected furnishings imbue the 70-seat restaurant and adjacent 50-capacity bar with subtle retro vibes.

A large Wolfgang Tillmans photograph from 1993, depicting tomatoes and aubergines by a pool, dominates the dining space, playfully echoing the menu’s Italian, French and Spanish influences and fresh ingredients, while a composition of recent and vintage posters from significant art exhibitions spanning the last 50 years enlivens the bar area which can be conveniently separated with a sliding partition. Retro vibes also characterise the bakery and grocery store where custom display units that recall European-style bakeries and Pasticceria are paired with terrazzo floors and industrial accents.

Reflecting the low-key, brasserie feel of the interior design, a light, mostly fish and plant-based menu by head chef Martyn Lyons includes seasonal dishes such as trout crudo with green citrus, broccoli with farro, goat’s curd and black garlic, and monkfish, mussel and chickpea stew with aioli. At the bakery next door, sourdough and slow fermented breads made with flour from carefully selected mills and local farms, are offered alongside a line-up of sandwiches and pastries including hazelnut frangipane brioche, pain au citron and spiced rice pudding quince croissants; the same space also offers fresh fruits and vegetables, cheese, tinned and dry goods, along with a curated selection of kitchen and homewares. Last but not least, a spacious, plant-filled terrace for alfresco dining completes Sharp and Slotover’s exceptional endeavour, ultimately making Toklas a culinary meeting point for all seasons.