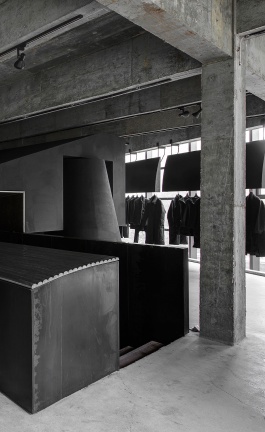 For most artists, creating art is something that is intrinsic in their chemical makeup. "I have always found drawing and painting as a way to make sense of the world around me, as well as a means of escape," says Greek artist, Vasilis Avramidis, the creator behind the compelling series of paintings titled Resort Archeology, Outskirts and Harvester. Having grown up in a small town in Greece during the 80's and 90's, Vasilis first received a BA in Fine Arts from the Aristotle University of Thessaloniki before heading off to London's Central Saint Martins for his Masters; in fact, he credits London for many of the influences that are still part of his work. "I discovered so much about art and about myself as an artist during that time. London and its outskirts are still the largest reference I use in my painted environments," Vasilis shares.

To date, his mainly oil-on-canvas creations have been exhibited to much critical acclaim in solo and group shows around the world, such as Art Athina in Athens, the Slete Gallery in Los Angeles and the Saatchi Gallery in London. His are the kind of works with brooding tones, encompassing subject matters and internal motions so precise that they attract viewers from across the room, beseeching one's notice as if a living, breathing object. "They are paintings of impossible landscapes that are being transformed into 'places' by the presence of the human mark, which, in this case, is architecture or fragments of it," shares Vasilis when we ask him about the thought pattern behind his elaborate brushstrokes. "I'm trying to create environments charged with anticipation and emptiness, ambiguous places with a sense of purpose which is yet unknown, or landscapes that create pauses out of sync with the rest of the world."

A quick glance and one instantly recognizes an intricate textural complexity to both the subjects depicted, as well as to the method of their portrayal. "The most critical parts of a painted image are being formed during the painting process, and it takes a course and life of its own," Vasilis says. For instance, let's take the oil-on-canvas work, The Story, which is part of his 2016 Harvester series. A painting with motion, substance and textures galore, one can almost envision the depiction of a grand conductor of nature playing with the efforts of men, who try but can never succeed in topping the beauties, power and drama of the elemental world around them - at least that's one interpretation. "This is a transformation of classical elements of portraiture and landscape, as an environment to facilitate certain minimalist architectural structures of the 70's, like hotels or resorts, drawn from my memory, but [which are] still alive today as ruins," Vasilis shares - in brief - about the painting.

In the near future, the latest works of this prolific artist will be showcased at the London Art Fair with The Contemporary London, between the 18th and 22nd of January 2017, in a two-person show alongside artist, Suzanne Moxhay - after that, he's taking on Japan for the first time, with the exhibition of a brand new series.