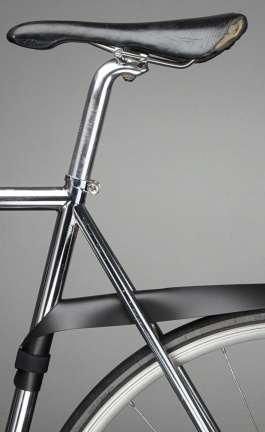 In a country like Switzerland, where the peaks of the Alps characterize the greater part of its terrain, ski gondolas fly endlessly above steep pure white slopes, as they embark  on their quest to conquer the highest summits. But what happens when this mode of transport which brings thousands of skiers to the tops of the Alps becomes the starting point for an exciting cross-disciplinary creative journey?

‘Verbier Mountain Climbers: Revisiting a Swiss Icon’ is a unique travelling exhibition that sees old ski gondolas being transformed into alluring objects quite like no other. The exhibition itself which premiered at the ‘Design/Miami Basel’ fair in Basel, Switzerland (11-16 June, 2013), is the brainchild of Inès Flammarion, Nicolas Bernheim and Albert Schrurs, three young Swiss entrepreneurs and celebrates an iconic object of Swiss industrial design and tourism.

The trio invited seven leading Swiss designers to re-imagine and transform salvaged ski gondolas from Verbier, one of the largest holiday resorts and ski areas in the Swiss Alps. With a fixed budget to cover the material costs and no creative limit whatsoever, the designers radically changed the gondolas’ visual aspect, creating seven eye-catching pieces that ingeniously re-imagine the classic Swiss icon in terms of form and function. ''We asked the designers to give these objects a second life, as interesting and emotionally strong as was their first life'', says Albert Schrurs. Retaining, or at times, completely tampering with the object’s original form, the designers approached the project in different ways, perceiving the gondola as a volume, a source of material or as an emotional trigger.

Reincarnated into entirely new versions of their selves, the seven gondolas presented at the exhibition range from furniture pieces to imaginative renditions of the object. Staying true to his playful approach on design, interior and industrial designerAdrien Rovero’s project ‘Rock’ humorously transforms the gondola into a 4-seat rocking chair. Atelier Oï's pure white ‘Cabine del Papà’ becomes a travelling cabin that encourages us to dream of taking off and fly towards amazing encounters and destinations. Philippe Cramer created 'Artefact', a spectacular museum-piece ghostly rendition of the gondola that delineates the object’s shape by using only its curved Plexiglas windows, a feature particularly representative of the Swiss ski gondolas. ECAL student Baker Wardlaw completely changes the function of the gondola, amusingly re-imagining it as a gigantic gumball 'Vending machine'. Product designer Jörg Boner joined forces with fashion and textile designer Lela Scherrer to create ‘Screen’, recuperating several gondola doors and re-assembling them into an interior screen that exploits the original object’s features. And then there is product designer Nicolas Le Moigne, who completely disassembled and re-assembled the gondola into an entirely different object. His ‘Transformers’-inspired project sees the gondola undergoing a complete transition from an outdoors means of transportation to a piece of furniture for indoors – a dining table.

‘Levitation’, the project’s promotional poster is also part of the exhibition. Photographer Anoush Abrar was given carte blanche to create an image that represents the essence of Verbier Mountain Climbers. Celebrating an object meant to travel in the sky and clouds, Abrar’s ethereal photograph spectacularly captures a floating body that offers a final yet perpetual ride in the clouds.

However, the Design/Miami Basel is not the only stop in the gondolas’ long journey. Staying true to their nature that is always on the move, the transformed gondolas will go back to their roots for a summer exhibition in Verbier after the end of the Basel fair. Following this, Genève Aéroport will host an exhibition of the gondolas where they will be on display throughout the airport spaces, offering travellers a chance to see the works up close in the fall of 2013. This will mark the end of the journey for the travelling gondolas, which will then be sold by Christie’s. The proceeds of the sale will be donated to the Make-A-Wish Foundation of Switzerland.