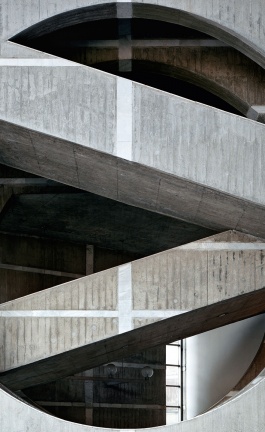 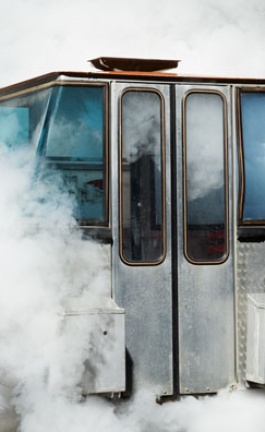 Sabina Lang and Daniel Baumann are a Swiss-American artist duo who have worked together since 1990 under the name Lang-Baumann. Not ones to limit themselves to the confines of exhibition spaces, Lang-Baumann are known for creating works of ambitious scale that all but take over the public sphere. Attracted to unexploited public spaces, they compellingly intervene with them, and in doing so, have gone on to create a range of situ artworks such as furnishing, mural paintings, sculptures and installations that play with elements of architecture and design. Their creations have included inaccessible staircases and parasitic inflatable structures that literally grow out of buildings and unusual expanding artworks that have occupied roofs and the underside of bridges. The streets of the city are treated and turned into a massive urban canvas as their pieces explore the overlooked dimensions within them. Always surprising and invasive, their artworks manage, however, to blend in perfectly with the urban and rural spaces that host their interventions.

In their latest public artwork offering, the prolific duo has just given the term ‘street art’ a literal meaning. ‘Street Painting’ is a series of urban paintings where geometrical shapes and bright colours are directly laid onto the street’s asphalt. With six paintings already completed in various locations since 2003, Lang & Baumann have gone on to create their seventh instalment in the series in Rennes, France. Laid out along Jules Simon Street, right in the heart of Rennes, this is the first of their paintings in France and it will grace the city with its presence until May 25, 2014.

‘Street Painting #7’ (2013) was produced by contemporary art exhibition space 40mcube and The PHAKT - Colombier Cultural Center, in partnership with Signature and Identic with the  support of the city of Rennes and the Swiss Art Council Pro Helvetia. Using road marking paint, the striking 59 x 3.7m artwork boldly introduces frenetic, disrupting geometries into Rennes’ streets. Loud streamlined forms in a razzle-dazzle-like pattern interrupt the grey urban context, creating an electric street carpet that literally pops out of its surroundings. Traditionally a medium meant to create permanent codified road signage, road marking paint is now alternatively used to blow up the codes and create a temporary environment that asks for the participation of the spectator, making him/her one of the protagonists of the artwork. Lang-Baumann tempt and invite us to interact with it, as we place ourselves into the most unlikely of environments. What may appear ambiguous at first soon becomes readable and familiar, lending another dimension to our notion of urban space. As a result,  their striking artworks make us rediscover public spaces, encounter new landscapes and witness original perspectives within our very own cities. In all their absurdity and whimsy, Lang-Baumann’s artworks transform the mundane urban landscape into a colourful, poetical and utopic realm.