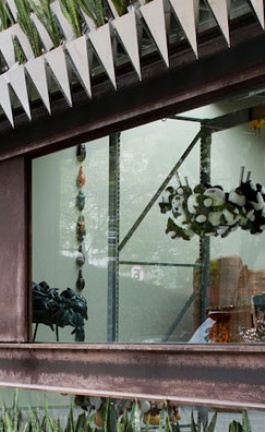 How Much Does Your Building Weigh, Mr. Foster? is a film that shows Norman Foster’s journey from Manchester to a global practice, discussing architecture, why it matters, and how difficult it is to do it well. Norman Foster has rewritten the rules of architecture. His vision and unswerving passion for excellence have created some of the most exceptional structures of our times. Architecture comes alive. Foster’s projects are photographed in a cinematic style that seeks to bring the spectacular nature of their size and scale to the big screen. It speaks to the specialists and the priesthood of design, but it’s not just for them. It speaks to everybody who has ever been excited by a work of art, or who has understood that some spaces have special qualities that others do not share. It’s for everybody who has been excited by the daring of a bridge, jutting out into space, or by the spectacle of a skyscraper that can define the identity of a city. It portrays how the world of art has influenced Foster and how Foster has brought the world of art into his design. Art, for the sake of the pleasure it gives and how, when combined with architecture, it leads to something greater and more uplifting that the sum of the two. It celebrates the special qualities of some of the most extraordinary structures of our times, and explores what it was that made them possible. It documents the way that great architecture is created, but does not flinch from the disappointments, and the set backs, and even the failures that come with it.

The film tells the story through images. Key projects are filmed in detail, conveying the movement of sunshine across the atrium of the Hearst Tower, the exhilaration of crossing the heights over the Pont Millau through early morning mist, whose central column is taller than the Eiffel Tower; or how the restoration of the German parliament becomes the symbol of a reunified nation. The experience of moving through each of these spaces shows what makes them special. We will also see how cities will be in the future through the example of Masdar in Abu Dhabi, a bold experiment in sustainability now under construction, which strives to become the first zero carbon, zero waste city in the world. At the same time, we hear the words of remarkable people who have collaborated with Foster such as Bono, Anish Kapoor, Richard Serra, Cai Guo-Qiang, Richard Long or Anthony Caro speaking for themselves, directly to the camera about the parts that they played.

About Norman Foster
Norman Foster was born in Manchester in 1935. After graduating from Manchester University School of Architecture and City Planning in 1961 he won a Henry Fellowship to Yale University, where he gained a Master’s in Architecture. He is the founder and chairman of Foster + Partners. Established in London in 1967, it is now a worldwide practice, with project offices in more than twenty countries. Since its inception, the practice has received over 500 awards and citations for excellence and has won more than 86 international and national competitions. Current and recent work includes the largest single building on the planet, Beijing Airport, Millau Viaduct in France, the Swiss Re tower, the Great Court at the British Museum in London, the Hearst Headquarters tower in New York, the Robert and Arlene Kogod Courtyard at the Smithsonian Institution in Washington and research centers at Stanford University, California. He received the Order of North Rhine Westphalia in 1995 and the Commander’s Cross of the Order of Merit of the Federal Republic of Germany in 1999. He became the 21st Pritzker Architecture Prize Laureate in 1999 and was awarded the Praemium Imperiale Award for Architecture in 2002. In 2009, he became the 29th laureate of the prestigious Prince of Asturias award for the Arts and was awarded the Knight Commander’s Cross of the Order of Merit of the Federal Republic of Germany 2010. In 1990 he was granted a Knighthood in the Queen’s Birthday Honours, and in 1999 was honoured with a Life Peerage, becoming Lord Foster of Thames Bank.