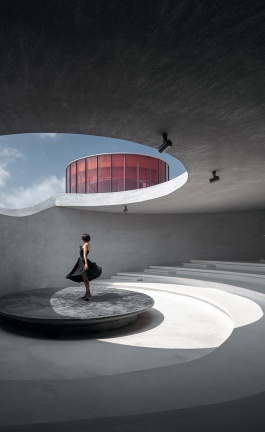 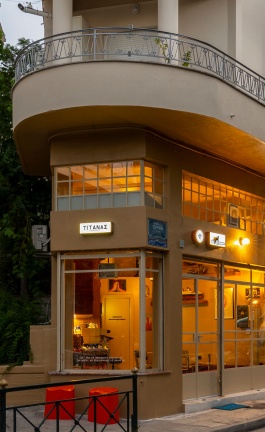 “May there be many a summer morning when, with what pleasure, what joy, you come into harbours seen for the first time”, writes Greek poet Constantine Cavafy in his poem Ithaka, a lyrical overture that perfectly sums up what we felt when we arrived last month at the port and only town of Kastellorizo, a gem of an island located at the easternmost end of Greece. Situated between Rhodes and Cyprus a mere 2 kilometres off Turkey’s Anatolian coast and measuring less than 12 square kilometres, the tiny and remote island is one of those bucket list destinations you’re always been dying to visit but never manage to. So, when we were invited to attend 4Rooms, a design project taking over a historical house in Kastellorizo, we jumped at the opportunity.

Curated by Annalisa Rosso, 4Rooms involves the redesign of Porta Rossa, a stately three-level house in Kastellorizo’s harbour, one of three artist residences of La Società delle Api (SDA), The Bee Society in Italian, a non-profit institution created by Silvia Fiorucci that promotes and sponsors artists, architects, designers and thinkers in developing their projects in collaboration with each other. Following a call to reimagine the property’s four bedrooms, a commission of distinguished creatives selected four international designer whose proposals combined innovative ideas that nevertheless honoured the island’s architectural heritage and traditional crafts, which could also be sustainably realised. The selected designers – Cypriot Phanos Kyriacou, Swiss-French Julie Richoz, Icelandic-German Studio Brynjar & Veronika, and Berlin-based UND.studio – were joined by French design studio Superpoly, who were commissioned to revamp the ground floor common spaces.

Lined with vividly painted Neoclassical houses, Kastellorizo’s technicoloured harbour attests to the island’s 19th century flourishing maritime-based economy. Porta Rossa, which takes its name from its characteristic red door, is one of such houses, originally owned by a family of sponge producers/merchants. Faithful to the island’s residential typology, the three-storey building had a 50 square metre footprint, masonry construction with wooden floors, and a double-pitched roof with a pediment on the façade. On the ground floor, an open-plan space once functioned as a shop and storage area, while the other two levels are traditionally divided into a larger front-facing room and a smaller space in the back. Conservatively renovated when it was purchased by two architects in the past, the house has been boldly reimagined by the selected designers as an Alice-in-Wonderland-inflected dwelling packed with vibrant colours, playful forms and graphic patterns that artfully echo the island’s natural landscape and cultural heritage.

For the ground floor common areas, French design duo Antoine Grulier and Thomas Defour, a.k.a. Superpoly, who also participated in SDA’s 5Rooms residency in Grasse in 2017-18, drew inspiration from the island’s strong connection to the sea designing a mesh-like limestone floor whose distorted grid resembles the fishermen’s nets, light pendants that look like fishing cages, and boat-shaped storage units. A palette of earthy hues juxtaposed with shades of vivid aquamarine and baby blue echoes the tension between the island’s rugged rock formations and the harbour’s brightly coloured houses and boats, while the hodgepodge of custom-designed tables, benches, chairs and stools conjure the communal aspect of the town’s streets. Minimal in design, yet imbued with the zany vivacity of the 1980s Memphis Group, Superpoly’s impressive interior belies its sustainability credentials—the team predominantly used objects and materials collected throughout the island. As radically as this sounds, the creative reuse of materials is part of Kastellorizo’s culture, as is the case in most isolated, resource-poor islands.

One floor up, Berlin-based Studio Brynjar & Veronika have conceived their room as a peaceful haven for work, rest and reflection. Hardwood floors, whitewashed walls and a bespoke collection of minimalist wooden furniture evoke an austere yet homely ambience. Colour also plays an important role in the room’s design; red-painted wall sections delineate the sleeping area and bathe the bed in warm hues, blue limewash imbues the bathroom with a refreshing, aquatic aura, while red and green details accentuate the working area. As the designers explain: “The room for Porta Rossa reflects the magical beauty of the island and its nature”. Sparsely furnished, on closer inspection unexpected details come into view such as the wall-mounted small rocks-cum-hooks that speak of the studio’s penchant for referencing nature and geology.

On the same floor, Cypriot-born, London-based designer Phanos Kyriacou used natural materials, sculptural forms and handcrafted objects to imbue the room with memories and stories related to his childhood in Cyprus. From the ruthless brilliance of the sun, to the sparseness of scrublands, to intimate family memories, Kyriacou has channelled the ineffable aspects of growing up by reinterpreting vernacular furniture typologies through a contemporary filter, adding sculptural elements and using natural materials in their raw state; “sometimes, materials become the objects themselves”, he explains.

For Swiss-French designer Julie Richoz, the starting point was the island’s traditional folk costumes which are made from fabrics from around the world. “I was immediately struck by the rich layering of cultures that defines Kastellorizo’s identity”, the designer says.  Featuring a rich variety of materials, techniques, colours and patterns, the local costumes not only attest to the island’s mercantile past but also embody its identity, functioning according to the designer as a means of communication. From rugs, to curtains, to lamp shades, Richoz has used textiles as much as possible, imbuing the otherwise austerely furnished room with comfort, colour and modularity.

Lastly, Berlin-based collective UND.studio drew inspiration from mythological 'chimeras', hybrid creatures composed of different animal parts, designing mind-boggling furniture pieces that serve multiple functions, most notably, a large object in the middle of the space which incorporates a desk, a cabinet, a floor lamp and a flight of stairs that leads onto a suspended platform where a bed can be found. The chimeric pieces, which also include a chair that incorporates three beach balls and a rug where plants grow, reflect the studio’s conceptual boldness as well as its multidisciplinary composition—every object was created through a collective dialogue between the studio’s designers, artists, cabinetmakers, and architects; interestingly, this is the first time that the entire team was involved in the same project. Blob-like shapes, abstract patterns and a candy-coloured palette further underline the project’s whimsical sensibility and sense of wonder, culminating in the bathroom that feels like you are in Bikini Bottom, where SpongeBob SquarePants lives in the eponymous cartoon series.

Entertaining as it was for visitors like us, at the heart of UND.studio’s design lies a central question for Porta Rossa’s future artists-in-residence: “Am I on this tiny island for a holiday? Is there work that needs to be done? Will I transform into a chiæmera, half-vacationer, half-creative labourer?” Thankfully, for us the answer was more straightforward: we were there to be inspired, and on that front 4Rooms more than delivered.