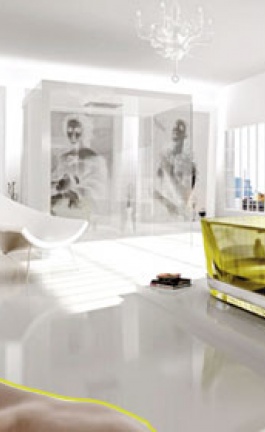 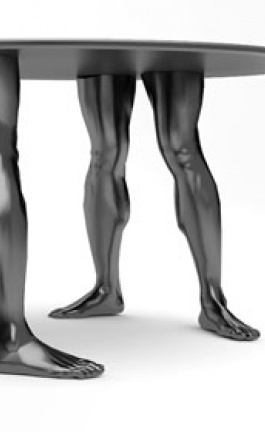 The impressive new building on 160 Wooster Street in New York was completed in 2005 and occupies the full block front on Houston Street between Greene and Wooster Streets at the north end of SoHo.  The building has a six-story base and an eight-story central tower that is topped by an exposed rooftop water tank. The tower is slightly off center to the west.

Despite its imposing bulk, the building contains only 15 condominium units, most of which are corner apartments. All the apartments have access to a common roof garden and the two penthouses have their own large terraces.   With its white metal cladding and red-brick center piers, the building pays nice homage to the cast-iron heritage of Greene Street and the cobblestones of Wooster Street.

BNOdesign was recently assigned the redesign and transformation of the lobby of this commercial project.  The 14-foot-high ceiling lobby has a separate service entrance with elevator access and two key-locked passenger elevators. The lobby is transformed with the usage of clean lines and simple patterns giving a feeling of a clean and modern contemporary design.

The usage of black tiles and black painted walls in the lobby portrays class elegance and wealth.  Especially when black is combined with white it generates a very strong statement in the area.  However, it is a color that can fit into almost every design to add contrast, type and make the accessories and the furniture in the lobby stand out.   The usage of white in the lobby along with the application of the clear lines creates a pure, clean and fresh environment.

When entering the building’s lobby through the main entrance a mirror which covers an entire wall to the right reflects the light off of the adjacent window making the space larger and brighter.  The furniture which is designed by BNOdesign and is distributed by NIBA Home is especially created for the needs of the area.  The well-designed and finely crafted furniture and accessories reflect the talent and the philosophy of the BNOdesign team.  The unique furniture creates an interior which is actually a living work of art.  The integration of the various materials and the styles in this clean line lobby creates a flirtatious mood especially with the handmade lighting by ABYU couture lighting // And Bob's Your Uncle Lighting, Inc.  BNOdesign has become the parent company of And Bob's Your Uncle Lighting, Inc., where Steven Wine and Michael Landon // designers, have a well-deserved superior reputation for their custom couture lighting pieces that have been in numerous BNOdesign projects.  The reception desks hanging light, is truly an exquisite example of the elegant ABYU custom couture lighting.

BNOdesign of Benjamin Noriega-Ortiz was established in 1992.  The office has produced projects for world renowned clients in the entertainment industry, the hotel industry and many others.  The results of each project are unique and tailored to the personality of the individuals who reside in the living space.  Their work is known for its clean lines and the simple patterns which make them design modern contemporary interiors.   Without focusing only on design BNOdesign remains faithful to the prevailing sensibility of classical architecture including the usage of strong axis, attention to proportion, hierarchy and the balance of form in the placement of furnishings within a space.