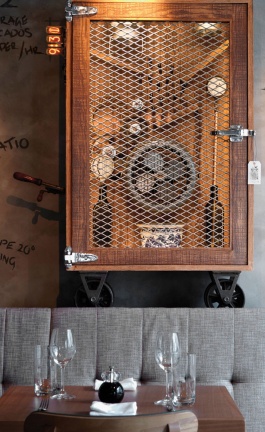 Stargazing At The Elqui Domos Hotel In Chile

DOWN THE RABBIT HOLE

Those who travel from time to time with ‘Alice in Wonderland’ can find it hard to escape her spellbinding charm. Tangled-up in a wondrous web of daydreams, they can’t help themselves from embarking on a fanciful journey to the Wonderland, falling down the rabbit hole over and over again. First published in 1865, this masterpiece of classic children’s literature has well cemented its reputation as one of the most widely beloved stories, and has never failed to captivate readers of all ages throughout the years.

Greek visual artist and acclaimed book illustrator Vasilis Papatsarouchas is possibly one of Alice’s most ardent enthusiasts, having repeatedly experimented with the famous Lewis Carroll text over the years. With his exceptionally strong relationship with the story that goes well back to his childhood years,Papatsarouchas is the proud owner of over 60 different editions of the book fervently collected from around the world. With his latest illustration project, he invites us along as he delves once again into Alice’s magical land, where a world full of mystery, whimsy, symbolism and absurdity unfolds right before our eyes.

Vasilis Papatsarouchas has come to be known as a prolific and highly praised book illustrator. During the past fifteen years, more than fifty books bearing his illustrations have been published in Greece and abroad, including two Collector’s Editions and four publications based on texts written by him. Among other distinctions, in 2004 he was awarded with the National Illustration Award for an adaptation of the classic ‘Little Red Riding Hood’, while in 2008 he was nominated for the prestigious Hans Christian Andersen Award, an award presented to a living author or illustrator whose complete works have made a lasting contribution to children's literature. But feeling he had unfinished business with his much-loved Alice, he revisited the story, creating a series of illustrations that accompany a new adaptation of the book published in late 2012 by Polaris. Following the success of the book, his illustrations were also presented in the exhibition ‘DOWN THE RABBIT HOLE – A Journey with Alice in Wonderland’ at the Stormy Gallery in Athens, Greece, whereby viewers outside of their original book format can continue to be mesmerized.

''It all started from a profound love I have for this classic tale and I believe it evolved into something truly novel and ground-breaking'', he explains. No matter how familiar one is with the story of Alice,Papatsarouchas’ illustrations give it a uniquely fresh perspective, inviting us to explore the famous Wonderland in a way never-before visualized once more. Driven by a deep nostalgia and desire to give life to his favourite childhood characters, Papatsarouchas draws from the heart, completely disregarding norms and trends where he explains how ''I work quite intuitively, guided by what pleases my eye''. In fact, he quite often likes to go beyond the strict confines of the storyline, adding his own personal touch, dimension and underlying narrative trajectories that captivate and surprise the reader. He intended for the drawings to visually narrate and contribute to the story of Alice, without however being reduced to a strictly descriptive purpose. A balancing act between illustration and fine art pieces, his drawings might be composed as part of a narrative, but they can further be seen as independent stand-alone pieces that can equally appeal to viewers without them necessarily knowing the story beforehand. ''This is after all what I ultimately aim to do'', he asserts. ''There is no point in creating images that merely depict the story with no other purpose whatsoever''.

The classic and well known story of ‘Alice in Wonderland’ is now visually recreated through his eyes following a more adult-oriented approach and interpretation that deviates from traditional children’s book illustrations. This new adaptation features a series of captivating hand-drawn mixed-media illustrations embellished by a mature colour palette that intelligently juxtapose ghostly outlines and clear silhouettes with a delicate touch of exuberant block colours. Papatsarouchas ingeniously simplified the drawings by retaining the most important narrative elements in order to dictate and give form to the story. In his stripped-down version of Alice there is a clear focus on the characters, their actions and the effect they have on the reader, where the background environment and scenery are kept to an absolute minimum. Simple in their manifestation yet highly expressive, his drawings are narrative instances where the whimsical and the absurd are effortlessly paired together in an enticing game of dramatic visual poetry.

Full of allegories and symbolism, his drawings explore and portray Alice as the multi-layered story that it is. ''As a person I am instinctively inclined to look for multiple meanings and interpretations in whatever that is that I do. I like to look for and discover things..... The same applies for the way I work''. In this way, he creates drawings that tantalize the readers’ imagination, playing with the way we see and interpret things and forms. This is effectively the very same effect that the story of Alice has on the reader and could very well be the reason why his attraction to this book is so profound.

The adventures of ‘Alice in Wonderland’ is certainly one of the most widely illustrated tales across various mediums. Vasilis Papatsarouchas however manages to offer a fresh perspective on the tale by creating a series of illustrations that equally captivate children and adults alike (just like the story itself). Arguably one of the most innovative attempts to bring the book to life ever presented, Papatsarouchas’ work is a true testament to his love for the story and breaks away from conventional book illustrations. Immersed in a state of whimsical absurdity and oddness, his unique vision invites us to follow him down the rabbit hole for an unremitting adventure into the unknown. And just like Alice herself, we certainly can’t say no.