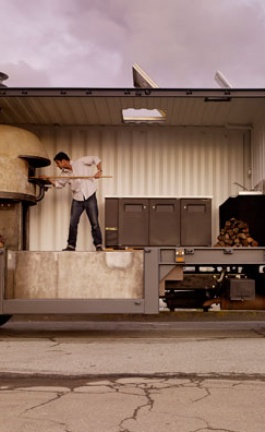 The In Order to Rebuild exhibition at the Dosi Gallery in Korea (20 July /18 August 2012, 202-­2 Kwangan 2 dong, Suyoung-­gu, Busan, Korea) features the work of Andrew Salgado, the London based painter from Canada known for his eerie paintings that are preoccupied with universal themes such as identity, sexuality and convalescence. He considers himself a storyteller and admits to his attraction to faces. 'I am attracted to interesting faces and I am certainly no stranger to melodrama. I like dramatic lighting and faces that immediately grab my attention and the attention of the viewer,''he says.

Salgado avoids subjects whose emotions are easily definable. He considers smiling, accessible and plainly ‘happy’ subjects as banal. ''I think it is much more interesting to paint faces that have a type of strength in their emotion. Along with the process of painting and abstracting the figure, I use emotion to confound and blur any easy reading of the figure within the work''.

The somehow disfigured troublesome faces encapsulate both the anxiety and pain of his subjects. As he explains, his latest work presented in Korea ''dealt with concepts related to the muddled line between aggressor and victim.''  Andrew Salgado a victim of hate crime himself relates strongly to ''stories from the perspectives of those who lost and those who have instigated such loss'', he explains. However, he is equally interested in the purely material properties of paint. ''How the paint moves across the canvas, the texture, quality and technique of my medium….I want the viewer to be as interested in this as the story of each piece,'' he says.  His use of abstraction is of no coincidence. He confesses that his greatest objective is the pursuit towards abstraction. ''I suppose this will occupy the entire trajectory of my career.''

When working, he constantly flits with the idea of challenging himself and feels excited when he steps away from his comfort-zone. Despite his constant preoccupation with faces, he admits that he wishes to move on from this frontal facial framing. For his forthcoming exhibition at Beers.Lambert Contemporary London, he says he wants to depart from that tendency to paint the face as simply the face. ''The few times I have thrown paint across a ‘finished’ face or abstracted a face beyond recognition, it has given me a thrill''.

His new series of paintings currently being shown in Korea are connected to some of his previous work.

>> I floundered a little bit in the studio at the beginning of 2012 without any real direction for a couple of months, painting things without realizing, or wanting to realize the connection between the works... I had watched a documentary about two brothers who – after a childhood of sexual assault from a friend of their father’s, brutally murdered their father… I became haunted by the story. I painted them in a diptych, and following this, had a relatively unpleasant heart to heart with my long-term partner which resulted in the self-portrait Trust. I came to terms with a very moving personal realization and finally, like a message, the concept came to me simply: something must be broken ‘In Order to Rebuild’ and thus came the title of the show. <<

This breakthrough made Salgado realize that his latest pieces were related to the aftermath of some painful incidents and started to consider the stories more externally. He became the observer, the storyteller. ''I looked for stories that interested me - which I felt in some way I might simply observe, without passing judgment or trying to solve. The latter works became quite colorful and vibrant, but maintain that curious balance between hope and pain.''