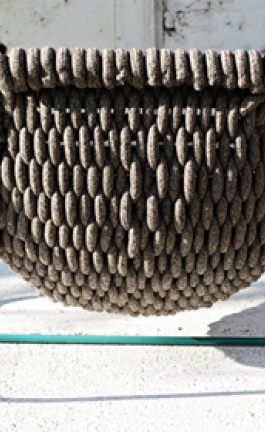 In 2007 the architecture office Subarquitectura ( Andrés Silanes + Fernando Valderrama + Carlos Bañón) was presented with a challenge.  The challenge was put forward by client Arco Design & Projects and it brought these architects the task of having to construct a house with a public programme of social relation, associated with the private life of a numerous family on a sloping plot of land with privileged views of the mountains outside Madrid, Spain. Their initial approach was seeking poetry within works of engineering, the outcome was sculptural motion.

The architectural minds behind Subarquitectura put the domesticity of the project aside and concentrated on creating a design which has as a point of reference motorway intersections and changes of direction. They wanted to create a form were you could be in a public atmosphere and with just a turn and a change of direction you are within the privacy of your personal quarters.  Through these concepts, the essence of cyclical movement and the magic existence of three numbers produced the result were form does not follow function. The magic numbers are none other then 360°.

As a structure the shape is characterised by the architects as a loop similar to that of what skaters and gymnasts produce while creating precise motions up in the air. Through the curvatious shape of the structure it generates a larger space in the areas with privileged views. The form is united acting as one with the landscape on one side, and then turns back on itself and becomes isolated and private. This is also incorporated interiorly, as the layout is designed so as the distance towards the end increases so does the degree of intimacy.  At the midpoint, there is a mediatheque, isolated and completely dark, 100% technology, 0% landscape.

You move around in the house according to the purpose you are fulfilling while the journey to get to your destination is also incorporated by the limitless or limited views. The long house is a sinuous movement, a descent by ramp and ample turning radii tangential to the setbacks of the plot of land that generate a panoramic vision. The short house is a quick way in a straight line with stairs of direct descent and a deep view towards the landscape.  All directions have a meaning and you can reach all points of the house through just two different routes.

This design approach also exists between out and in. The exterior cladding is black slate which is almost imposed as an aesthetic specification of the area were as the interior is white reflective, generic, neutral and luminous. Life incorporates colour symbolising the outside with the vegetation and the inside with the people. The interior has clarity purity and simplicity. The prime focus is the views the landscape and all that surrounds it.

When you look at the structure you instantly perceive motion. Through the architectural shape the interior lifestyle is identified. The structure was build thinking of this, fulfilling this and dominating this. Were the form is raised from the ground and supported on the opposite wing you get the sensation that there is still movement to be done in order for the structure to sit on the wing better. It’s almost as if it is movement itself. Of course if you look at it from the rear at the pool side location it is exactly the opposite. Here it is naturally perceived as if it is falling of the structure. This architectural movement counter balances the tranquillity of the exterior landscapes creating an opposite language system between them.

The whole structural building has a meaning and a relationship to everything around it and a symbolism of a lifestyle within its interior.  It is thoughtfully designed so that everyone residing in the different spaces has maximum usage of what is needed according to what is their function and were they are going.