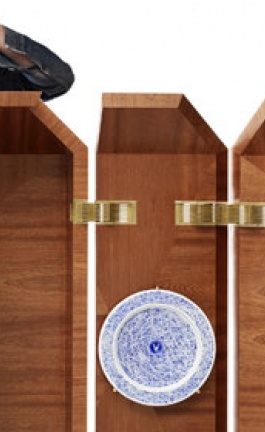 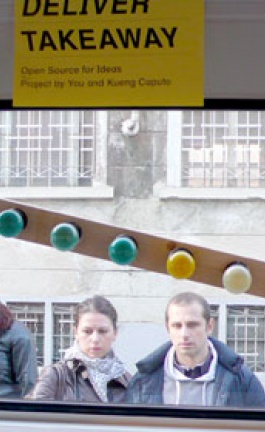 How would seating be without a chair?  Quite ironic, but Vitra presented “chairless” during Milan Design Week 2010.  I guess chairless is the perfect device for fidgety people who just cant settle themselves even when cross-legged!  Despite the fact that chairless was designed by Chilean architect Alejandro Aravena the seating strap is commonly used by the Ayoreo Indians, a nomadic tribe living in the Gran Chaco region (border region between Paraguay and Bolivia).

Chairless could be used by the modern “nomad”, if I may use the term nomad in today’s society.  Undoubtedly, the chair or the sitting strap is definitely the most minimalistic design that one could get if they were asked to design a seating device.  Chairless is nothing more than “a textile strap joined into a loop, measuring 85 cm in length and 5 cm in width, which can be wrapped around the back and knees in order to stabilize the body and relieve tension, while in a seated position.”

Remember that your sitting strap could always be folded up and carried easily around as it fits easily into your pocket.  According to Vitra, Chairless relieves the back and the thigh muscles from pressure, while the arms and hands which are needed for support when sitting cross legged are not used to support our legs, instead, they could be used for other tasks such as reading, writing, eating, drinking or whatever else you can imagine as your hands are now free.   It is designed for people who have a height of 160-195cm (5ft 3in and 6ft 5in).  The strap is made of wear-resistant polyamide and is available in four color combinations: anthracite with decorative stripes in fuchsia or dark lime; dark lime with decorative stripes in fuchsia; fuchsia with decorative stripes in dark lime.  I have to admit that the designs look great as a belt for any pair of casual pants!

In no case is chairless a replacement of a chair, but it is rather seen as an alternative when a chair is not available.  Chairless is ideal for any outdoor situation, such as the beach, the park, in crowded trains, or airport terminals, but it could also be used if you want to sit on the floor at home.  “Alejandro Aravena came across the sitting strap and recognized its potential. In cooperation with Vitra, he developed Chairless into a product.”   The best of all however is that a portion of the proceeds from chairless will be given to the non-profit organization, The Foundation for Indigenous Communities in Paraguay, which directly supports the Ayoreo Indians.