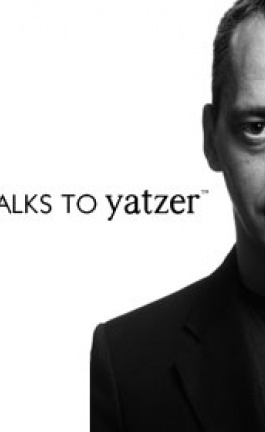 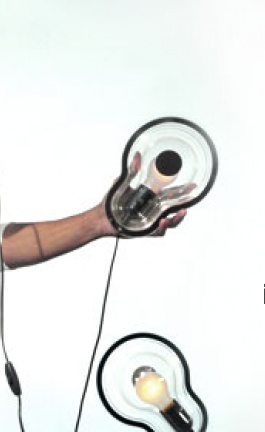 During Milan Design Week 2010 Fabrica featured its highly creative projects from the Fabrica design team.  In a form and fantasy world the Art Director of Fabrica, Sam Baron and the resident designers created projects which above all questioned in an argumentative manner the subjects which they had been proposed to study.  As each designer is distinctive and Fabrica encourages not only a technical but an intellectual approach to their case study each result was unique.
Starting with the presentation of Down Side Up at Palazzo Borromeo, their modular furniture collection is a series of four wooden boxes of different sizes, with random holes of the same size.  The boxes can be transformed into various furniture pieces by simply adding legs and/or knobs.

The four main boxes have been designed proportionally dimensional in order to offer a wide range of possibilities.  With these factors in mind design challenges the final form of a given object, while it creates objects which vary in use and function.  The collection experiments with the meanings of consumption and design as well as the broad range of possibilities available.  Through this creative approach in design we discover that “a work desk can also be a shelf, a stool can also be a bedside table, and a bench can also be a grandfather clock.”  The design team behind the concept of Down Side Up makes us re-interpret the meaning of a wooden volume covered with holes, the legs, and the knobs.  Despite the visible factor of change which is imposed on these pieces what remains constant throughout the concept is the diameter of the holes which have been inscribed in the wooden boxes.

At Palazzo Borromeo we also enjoyed the project entitled Around the Table which is a selection of blown glass and ceramic objects for Secondome.    We immediately felt as if we were invited to a très chic tea party where the objects created an atmosphere of elegance despite the fact that there was no tea or cake in them and obviously no tea party!  A collection of glass cake stands, glass trays and a delightful teapot travels us to the magical scene of the Tea Party in Alice in Wonderland.   The clarity of the glass as well as the simplicity of the form accentuates the elements on the object itself.  The ceramic collection resulted from a workshop between Fabrica’s designers and a maiolica master craftsman in Italy’s Puglia region.   The Renaissance craft of maiolica with the artisan’s know-how meets the creativity of today’s designers.  The designers wish to experiment with the processes of the past while applying their own cultural background, their experiences, and their creativity to create a new experimental form.

Around the Table // Glass Collection, 2010
Diagonal by Catarina Carreiras plays with diagonal lines;
Voilà by Valentina Carretta is reminiscent of the tail and legs of a cat;
Sprinkles by Yukihiro Kaneuchi seems to be covered with colored sugar;
Happy by Yukihiro Kaneuchi is to wish a happy life;
Tree tray and Tree dome by Jaeun Park, is about the cake becoming the foliage.
Fanny Fauna/Teapot by Valentina Carretta

Around the Table // Ceramic Collection, 2010
Arms family by Jade Folawiyo reminds us of African handicraft;
Pegada by Goncalo Campos, uses geometrical shapes playing with delicate soft lines;
Ribbon by Yukihiro Kaneuchi, is a ribbon wrapping itself in a vase;
Ruota by Valentina Carretta, is about material contrast, taking the wheel out of its context to become a fragile object.

Fabrica was also at Salone Satellite with The Riot Act, a collection of 12 decorative objects.   All objects have a main cylindrical shape which is transformed through the process of addition or subtraction of elements, through modifications in their form and function and are therefore given a new use.  The collection bears its name from the 1713 “Act of the British Parliament which gave local authorities the right to order the dispersal of groups of 12 or more people deemed unlawfully assembled”.  The objects have created a synthesis through elements used if one was to disregard the proclamation.  The design result of The Riots Act allocates a creative interpretation of the historical event of the past through the eyes of a young designer of the 21st century.

Furthermore, invited by INTERNI magazine, Fabrica’s young Portuguese designer Catarina Carreiras presented her Divine Providence project at INTERNI THINK TANK.  Divine Providence is an exhibition/event, but above all a project which triggers us to think and reflect where we stand in regard to a machine an inanimate being.  In a society where humans are at their own will dominated by technology, it is important to reconsider and evaluate the relationship between the human being and a machine.  We spend more time and energy with lifeless machines than with the ones we love.  Divine Providence looks “at technology as an entity with a soul, a kind of private god that we adore and trust, to whom we turn for guidance and advice”.  By the usage of web printing, a new concept developed by HP Imaging&Printing Group, Carreiras designs a new “religious arsenal” for the contemporary designer.  “The printer is considered a creative tool – ignoring the role it plays in mass production – to create a limited series of images illustrating a new enunciation: design providence”.

About Fabrica // source Fabrica
Fabrica, Benetton’s communication research center, was set up in 1994. The fruit of the Group’s cultural legacy is based in Treviso, Italy in a complex restored and enlarged by world renowned architect, Tadao Ando.

Fabrica is not a school, advertising agency or university. It is an applied creativity laboratory, a talent incubator, a studio of sorts in which young, modern artists come from all over the world to develop innovative projects and explore new directions in myriad avenues of communication, from design, music and film to photography, publishing and the Internet. These artist-experimenters are accompanied along their research path by leading figures in art and communication, blurring the boundaries of culture and language and transgressing the traditional borders between a diverse range of communication mediums.

Communication research at Fabrica services a wide variety of social causes and disciplines such as economics, social or environmental sciences. Fabrica’s aim is to grasp the future by giving innovative exposure to cultural or scientific projects which open a window onto tomorrow’s world.