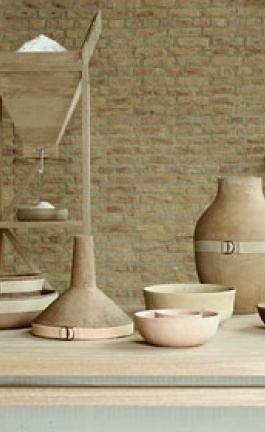 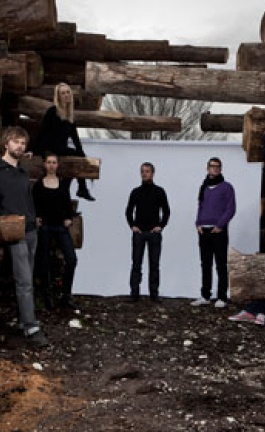 Yatzer’s Motto is “design is to share,” and it is vital to us to not only share with you the projects from which you may draw inspiration, but also to present the creative minds “behind the scenes.”  We decided to interview Sam Baron as The Yatzer Team highly regards his works, his career path and his multifaceted personality. In today’s design world where we are bombarded by products with little or no difference between them, it is imperative to find people who wish to make a difference by designing.  A designer who raises concerns and provokes questions through his designs by using the know-how of the past fused with the contemporary mass production of the present.  A mentor to Fabrica’s designers who have been selected for their residency year; as the director of Fabrica’s design area Baron is very supportive of his team and stands compassionately beside them, while admiring them as they take their own proud steps.  The latter is a personal experience as we had the opportunity to meet Sam Baron and some of Fabrica’s residency designers during Milan Design Week 2010 and realize the above.   We hope you enjoy this interview as much as we did!

Despite the modern appearance of the products which you’ve designed there is something very classy, elegant and chic about them.  Is it done intentionally to bring the aura of the eclectic past to the contemporary mass production present?
I think that nowadays mass production and "exclusive" or "limited" editions are very close to each other in the way that are almost sharing the same contexts of presentation, the same contexts of valuation… (in a gallery or in a retail space).
It is not so much a dilution of boundaries, but an exchange between worlds that keep their identity, but yet mingle… So yes! This is inspiring, and I quite like the idea that a mass product has its own soul, or that a piece can represent a certain "quality" or question an aesthetic standard.

As a French designer, I assume to be inspired by my own culture, the "chic" and the "elegance" (part of France's cultural referents…) are also composing parts of my language.
A mass product can also contain these values, as more atemporal values rather than ephemeral ones.

If something, that we as designers, have the responsibility to put on the market, can pass through times it's because design is not only related to fashion or ephemeral trends, but is something that can stand on its own as perfectly integrating different contexts.

What has strongly influenced you to reinterpret past /traditional designs into contemporary objects?
Not so much a particular piece or designer, but an overall idea that design also means placing pieces in context, in relation to the history and life of objects.
The designer rarely invents, and most of the time re-writes shapes, functions, with his own particular point of view or language. In my view, it's important to translate some signs of our material culture the "different" times or to project in our contemporary lifestyle some forgotten issues, or items, in order to keep the story going on... It's a way to talk about where we come from and where we want the society to go.

From very classic materials such as ceramics, glass, wood to polyurethane where you are the co-founder of Bob Design, a label which designs and manufactures polyurethane objects.  How did this shift come about?
Bob design, was founded when I was in post graduation, with Laurent Baulé and Pierre Offray (Baulé+Offray+Baron=BOB). It has been an opportunity that we get from "who's next" fair that invite us to create a scenography using some resources that were close to us, as the polyurethane industry that L. Baulé worked with during his design studies in the St Etienne Fine Arts School.

Of course, materials are important (and meanings and connotations embedded in them) but, for me, the notion of "project" is the most fundamental.
I always try to find an adequate answer to the questions coming from an industry or brand. Basically I have to propose a solution that will address the final customers/users. By absorbing the DNA of my client, his future products are my interpretation of his background and needs.

Where do you draw inspiration from?
I think that traveling and watching how people are living is one of the most interesting inspiration sources. I also try to go, as often as possible, in art galleries and museums. I really appreciate the freedom that artists assume to address their messages.

Have you been influenced by any specific designer or movements?
If so, by who, or which movement and why?

I don't know if I have been influenced by designers but there are some of them which I really respect, as Andra Branzi or Michele de Lucchi, especially the objects that he is designing for his own brand "Produzione Privata", some of which are poetic, sophisticated and natural at the same time. Jean Royere is also an important reference for me as someone that was able to take over a full project and create a strong narrative, using each detail as a word in the overall sentence he was "writing".

Tell us about what you have achieved within the decade that has passed from the day that you graduated up until this day.
I think I succeed to position my self, my approach to projects and my personal language.  To build, project after project, your own world and you own vision, is a long way you have to walk until you earn recognition from your peers, clients and colleagues.

Product designer, interior designer and exhibition curator, which of the three do you prefer to do the most and why?
It's very hard to answer this question, because every case is a different "mind exercise" to succeed in proposing an answer that you estimate as the most appropriate one. It is also very important not to do always the same kind of thing. Working in different scales allows me to breathe new air and to envision every day as a new one. It also offers the possibility to challenge myself, by facing new proposals, restrictions, and finding new doors to open!

Tell us about Fabrica, (for those who don’t know, Fabrica is Benetton group’s communication research center) and the projects which you have overtaken as design Director at Fabrica.
Fabrica is this incredible structure sponsored by the Benetton group— thanks to Luciano Benetton's open-minded vision. Between forty to fifty creative people, under twenty five years of age, are selected every year, and attributed a scholarship to work on their own creative field and media (interactive design, video, music, visual communication, photography, writing and industrial design).

My responsibility there is to select and manage a team, to find and develop projects that will be interesting for us. These can either be pure research or commissioned by brands and galleries that we choose to work with.

I am also the art director of the Fabrica Features brand, which is our own brand of products, ranging from 1 euro to 10 000 euros, and sold all over the world in +/- 2000 shops. We have a few dedicated FabricaFeatures shops, divided into gallery space and retail space, that allow us to showcase Fabrica's talent abroad, and to select and promote local talent.

Most projects for Fabrica seem to have a flare of styling is it the styling or the products in which you give emphasis?
Fabrica's infrastructure and facilities allow us to think of a product not merely as a "new good" on the market designed by someone. The multidisciplinary team, and respective team managers, offer us the possibility to think of the project as a whole: ranging from the first sketch to the catalog, through prototypes and window displays/presentation.

In this way, our concerns go beyond the object, to their wider implications as projects, since objects entail a straight relationship with context, lifestyle and embedded values.
Also Fabrica, as a research center, has to bring a vision onto the market, so we consider each detail in order to construct/articulate a clear statement.

Is there a project which you feel particularly proud of that has given you the most satisfaction?
Of course there are some references and moments that have been very meaningful and important for me, but let's say that the next project, as a new step, is always the one! …better to look forward than back.

What is a day like in the life of Sam Baron?
My time is divided between Paris, Treviso and Lisbon, so there is never a similar day in the year.
But let's say that I share my time between my sketchbook, my blackberry and my computer to make things happen.
I am either forgetting the world when sketching or connecting with the world when making a phone call or emailing!

How is the design process like for you?
Having ideas it is a relatively natural thing for me, a kind of freedom. The process of rethinking, focusing and adjusting them takes quite longer, like a kind of filter I have to impose myself to submit through.

Do you read design related websites/magazines/books?
Not so much…, I am more into art books and taking a look at other creative fields with broader, rather than strict, relations to design culture.
It's good to see things that do not confine to the typified idea of design, instead of reading design, eating design, breathing design…

Did you want to become an industrial designer when you were a kid?
No. But, even when I was very young, I was already creating stories and narratives in my mind!

Is there something in particular that you would like to design for a company that you haven’t designed yet?
I think that a restaurant is a great exercise because it's about people gathering, sharing great moments together, around good food and good wine. The meal ritual and setting is also a very interesting exercise about culture.

What are your future plans?
To keep on going… It is very nice to mix roles, for example as art director and industrial designer— while one comprises a global vision, the other entails a very applied concept.
"Show must go on!"

About Sam Baron // (source Fabrica)
The French designer was born in 1976 and began his design activity in 1997.  In 1999 he graduated from Ecole des Beaux Arts de Saint Etienne with a degree in Design.  In 2001 he received a post-graduate degree in Design from Ecole Nationale Superieure des Arts Decoratifs de Paris and at the Ecole des Beaux Arts de Saint Etienne.  In 2003 and 2004 the French Ministry of Foreign Affairs invited him to represent French Design at Tokyo Designers Block, winning the Prize for Best Installation with the exhibition entitled Rendez-Vous.  In 2003 he was selected to be part of the design department of Fabrica where he worked for one year.  His ceramics plates collection “slices of Design” is exhibited at the Cooper Hewitt Museum of New York and is sold worldwide by Bosa.  Baron has a rich portfolio of works with clients such as Louis Vuitton, L’Oreal Group, Sephora, Musee des Arts Decoratifs de Paris, Renault, De Beers London, Vista Alegre/Atlantis Portugal, Baccarat, Vitra, Maxalto and Christofle.  He is the winner of the 2007 Grand Prix de la Creation de La Ville de Paris and the Createur de l’Annee 2010 promoted by Maison et Objets.  He currently lives and works between France, Portugal and Italy where he directs Fabrica’s design area.