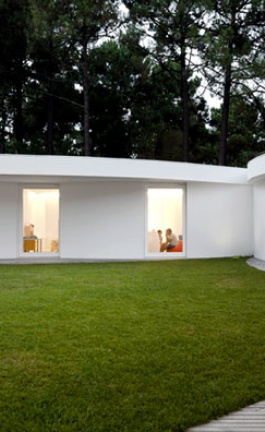 In the world of contemporary art, when you ask an artist about the messages that he/she is trying to convey, you are most likely to receive a pompous answer/just another boring cliché. This was not the case with Henrique Oliveira, the Brazilian emerging artist known for his spatial wooden pieces whose irregular forms devour large spaces which give you the sense that you are actually inhabiting someone’s body.  His answer had no unnecessary use of any conceptual lingo. ''I believe that the message is never art itself, but instead, the lack of a message is a characteristic that makes some creations interesting to me,'' he says, adding ''my works may propose a spatial experience, an aesthetic feeling, a language development and many more nominations to refer to the relation it establishes with the viewer. But, any attempt to find a message would fail.''.

Oliveira’s art may not convey messages, however as he explains, his Brazilian identity and culture is something that is very evident in his work. “I believe that all everything that we make is the result of our life experience, our culture, our language and the exchanges we have made with other people during our lives,” he says.

Analyzing his identity and experiences that form his practice, Henrique Oliveira refers to plywood, a material that largely dictates his sculptural work. In São Paulo, there are a lot of constructions currently taking place and the most common material that is used to isolate the construction site from the street, is plywood.  In 2003, when he was still an art student he researched painting surfaces and various surfaces as paintings.  It was a time when plywood became a reference.  ''What first caught my attention on this kind of deteriorated plywood was its pictorial aspect,'' he says. “The textures, the colors and the different tones that were organized in layers, reminded me of a painting surface,'' he adds.

But what is the force that dictates the way you work? I asked him. And since the material plays such a pivotal role, doesn’t this restrain your ideas?  ''The development of these works was made in a progressive attempt to force them to conform to my imagination,” he says.” It was a struggle between my wish and the resistance of a non-easily manageable material.''

Oliveira’s sculptures extend over large spaces that almost command a whole room. They demand space, a lot of space. I naturally wanted to know if scale does matter in his practice and if as an artist, he is attracted to the idea of going large. ''The materials I use are made for construction use and thus in a way I have to go large.''

His wooden pieces are chaotic and abstract. They, however, have a natural feeling to them in contrast to his older paintings, which are less naturalistic. ''They have two different moods and I like to have them in parallel, I think they even work as a compensation for each other,'' he says adding: ''The artificiality of my paintings is related to the materials and the colors I use, but they have a truth in the sense that they don’t try to be anything they are not, what you see there, is paint manipulated on a surface. My wood constructions are natural in their materiality, but they are artificial in the sense that they give the viewer a sensation of something that is actually not happening.''

Henrique Oliveira’s wooden pieces carry two different themes. ''I call them pictorial and organic,” he says. Although he always starts from a sketch, when occupying large spaces his work is made in a much freer way. “In the organic works, which are based on more clear references such as skin, bellies, organ, or tumors, I tend to follow a plan which can be changed a little bit on the way.''

Whether organic or pictorial, Henrique Oliveira knows that his works transmit a sense of temporality. His aged wooden pieces ''show the transformation of matter,'' he explains. However, ''there is also a temporality that is more about the present. There is a sense of movement''. This temporality is both deliberate and dictates the form of the work. In his very round wooden installations he explores the elasticity of PVC tubes playing with the idea of swollen walls. Through these pieces, he gives a sense of movement whilst creating dramatic surfaces that capture viewers.