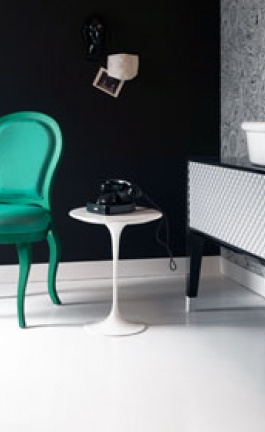 In bathroom with COCO 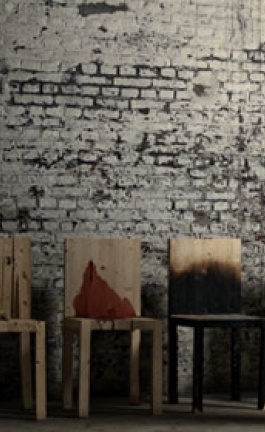 Otake House is located in the western region of Hiroshima in Otake, Japan.  This passive solar design house is constructed on a high plateau that neighbors with Kamei Park of the Kamei Castle Ruins.  With specific orientation of the eastern and western facades to meet the requirements of a passive solar design, the southern façade overlooks an industrial region and a scenic mountain range, whereas the northern façade has an incredible view, especially at night, of the Seto Inland Sea and Miyajima.   Suppose Design Office designed a house which would take full advantage of the two contrasting scenes; like the contrasting black and white motif in this house!

The design of passive solar buildings aims at maintaining interior thermal comfort throughout the sun's daily and annual cycles while at the same time it reduces the requirement for active heating and cooling systems.   Passive solar building design is just a part of green building design, and does not include active systems such as mechanical ventilation.  However, the ability to achieve these goals simultaneously is primarily dependent on the seasonal variations in the sun's path throughout the day.  This occurs as a result of the inclination of the earth's axis of rotation in relation to its orbit. The sun path is unique for any given latitude. Generally the sun will appear to rise in the east and set in the west.  Otake House is designed in such a way where the eastern and western facades take full advantage of the sun; in plain “Yatzer” the sun’s rays hit the windows in winter when the sun is low on the horizon, but they don’t during the summer when the sun is high in the sky.  Therefore, the house is hot in the winter and comparatively cool in the summer!

Suppose Design took full advantage of the scenic view by placing the bedrooms on the ground floor plan, and saving the best view for the communal areas on the first floor.  However, the area of the house is structurally divided into load bearing zones and free zones; as a result we have an area which incorporates two personalities simultaneously.  The northern side of the house is the area where the scenery is enjoyed for its magnificent view of the sea and Miyajima, whereas the southern side is the tranquil, spiritual scenery where one finds himself.

The ground floor of the house consists of a relatively conventional floor plan according to what Suppose Design Office has gotten us used to.  The space is formulated by three children’s bedrooms which don’t remind us of anything in terms of space to the westerners’ perception of space; and a very small and simple main bedroom for the parents which consist of nothing but a double bed.  The minimum closet space amazes us, but isn’t that what Japan teaches us, the simplicity and the minimal requirements that a person needs in order to exist.  An astonishing minimal bathroom proves for one more time that Ludwig Mies van der Rohe couldn’t have been more right when he said “less is more!”  The simplicity of the bathroom which seems as if it is wrapped in the glossy white waterproof material (used in ship construction), the ribbon windows, and the majestic scenery of the mountains right from your bathtub or shower create a feeling of tranquility, and serenity to the occupants.

On the first floor the north side of the house with the load bearing parts of the structure includes the kitchen, dining area, and wide openings to view the distant scenery giving off a sense of openness even when it is closed.  The architects and the occupants wanted the southern side of the house to be as close as possible to the exterior environment; in order to accomplish this they designed a living area and a terrace with a six meter eave, while getting rid of some structural elements and still promoting a safe living environment.  With a simple objective in mind, to create an open space with no barriers between the inside and the outside the terrace and the living space were treated equally.

Despite the drawbacks, careful consideration was taken in supporting the six meter eave, and once safety standards were taken into account the house was beginning to formulate; it had a shape!  The whole house is covered with water proof material used in ships; ship construction know-how was essential for Suppose Design.  This exceptional house has no sealants or tiling; the glossy water proof coating wraps uninterruptedly from the outside to the inside of the house allowing for the sharp edges and clear finishes to be clearly defined.

Having in mind the execution of the house from the planning stage, Suppose Design office discovered materials which were previously unknown to them.  Being able to see the design of the house from the plans led them to more informed decisions and gave them a better direction regarding which material to chose.  The glossy waterproof material apart from the exquisite design is what makes this house exceptional.  The deconstruction process of creativity, design, and of standard practices gives new perspectives to structure, utility, form, materials, the interior and exterior, the relationship of form and space, and the coexistence of the building with the surrounding environment.  The experimentation in planning opens up new untaken paths which didn’t exist in traditional house structures.  The coexistence of traditional and new values surpasses the borders and creates the design of the future.