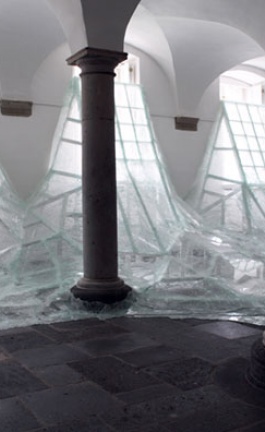 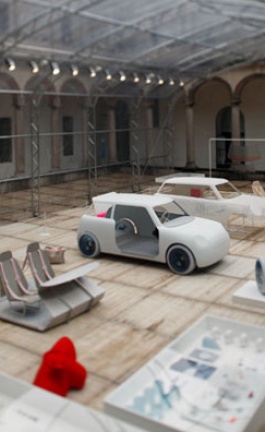 What is creativity if not a struggle for freedom; a fight against what impedes progress, a source of constant tension and the ability to turn adversities into advantages at the end of the day? That was the answer given by the creative team of TEDxThessaloniki in its effort to transform this year's topic 'The Courage to Create'' into a holistic creative concept.

Whether it is the phrase ''The Courage to Create'' in this year's graphics οr the hero in the promo video, the subject is constantly striving to exit its form and break from its boundaries. In order to effectively communicate the notions of struggle, effort and courage, the team created a tangible typeface. The fonts that were produced were chosen after various experiments with sizes and forms and were tested with several different materials, so that the movement had the most powerful visual effect wherever used.

Accordingly, in the teaser the man struggling to escape actually manages to use what keeps him behind as a force with which to go forward, create and move towards a new reality.

The team of TEDxThessaloniki chose ''The Courage to Create'' as the topic of this year’s event months ago, inspired by a book by Rollo May.
>> [A]t a time of great change, when one age is dying and the new age is not yet born, a choice confronts us. Shall we, as we feel our foundations shaking, withdraw in anxiety and panic? Or shall we seize the courage necessary to [...] consciously participate, on however small the scale, in the forming of the new society? <<
Rollo May

As we are in the midst of an unprecedented crisis, bombarded by pessimism, feeling disarmed and unable to respond, this question is now begging for an answer more than ever. We are propelled towards new ways of thinking and acting and we need courage to move forward, to create and form the new era before us.  This is the thinking that lies behind the whole TEDxThessaloniki effort, behind what is expected to be a great event on May 12th 2012 at Olympion.

More than twenty exceptional speakers and performers, from Greece and abroad will present their ideas that are worth spreading and spare no effort to inspire the audience to follow their dreams and keep their faith in them, even when they seem impossible.  Among them you will find Ben Hammersley, one of The Wired 100 Most Influential People, Areti Markopoulou and Tomas Diez architects and co-founders of Studio P52, an international platform for transcending the boundaries of individual creativity, Edi Rama, an Albanian politician and writer who served as Mayor of Tirana for three consecutive terms and who is famous (amongst other things) for carrying out the Albanian capital’s regeneration project.