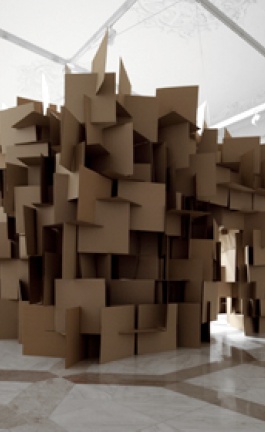 >> As long as something creates a reaction it’s alive << says Maurizio Anzeri, the Italian born artist from the city of Loano. Known for his series of eerie portraits or photo-sculptures, a term used by himself to describe his portraits, Maurizio’s work will be presented this month at the Baltic  (25 June - 11 October 2011) and will mark his first solo show in a major UK institution. Yatzer caught up with Maurizio Anzeri and discovered the man behind the embroidered vintage photographs who is enjoying an extraordinary moment in his career.

Maurizio’s Mediterranean temperament and warm nature was evident in the way he talked about his work, an element that deeply engaged me to our conversation. You could see on his face that the passionate relationship he develops with his art and the different characters of his portraits create narratives, which intertwine in unexpected ways. >> I started to collect portraits because I had a passion for them << he says.  It was this passion and obsession with faces that later became the body of work we all see now he admits. Sitting somewhere in the Mediterranean, in places where loads of people pass by, gave Maurizio the chance to observe different people, something that later turned into a great inspiration. He has been working on this series of portraits for the past three years after deciding to take a break from his previous work: Enduring Seconds. >> Enduring Seconds was a series of about 30 works which had to do with drawing and embroidery. I was using a really thin Japanese ink-pen to draw legs and then carried on with embroidery on the drawing paper. <<

Shifting from his previous project to his current practice, Maurizio says that he is interested in everything a photograph represents. When travelling, he visits flea markets and collects photographs that are later transformed into pieces of art. His portraits maintain the quality of a photograph but then start to become three-dimensional something that prompted him to invent the term: ''photo-sculpture''. It is this three-dimensional element, achieved through embroidery and the form of intervention it brings that transforms the portraits into photo-sculptures.

Talking about photography as a medium Maurizio explains that he is more interested in its use as an object and material rather than in its process. >> When we all look at a photograph, we somehow believe that we look at the truth or at some kind of reality but we know that it’s not, It’s just a moment << he says. Capturing a moment on that piece of paper is to Maurizio truly fascinating. >> We all still look at it as if it’s real. It’s trapped in there and it’s like you managed to cast some kind of magic spell on that piece of paper to entrap some kind of reality to use and reuse every time you look at it <<.

Vintage photographs without a doubt carry with them something from the past but to Maurizio, his work is not about preserving or celebrating the past. >> I don’t want to be nostalgic. When I work on them, to me they become very present. The catch is that at some point these photographs were to some people really important and suddenly they ended up in a box,<< he says. When confronted with his portraits it’s as if Maurizio wanted to create a passage for the character to escape from their present form. You can see that a part of them is still there and the other part has become something else. >> I think that what makes them work is that the image and the embroidery at the top feed each other, << he explains. He has no intention to cover or to erase. >> It’s about feeding another dimension << he says. For Maurizio, the physicality of puncturing a needle in the actual image ''is an action of penetration''. >> I have been told many times that one of the characteristics of my work is to cover when there is nothing to cover. And I like that and it’s not even hidden the fact that there is nothing to cover, << he explains.

His intimate relationship with the people in the photographs is so powerful that Maurizio seamlessly admits: >> I develop relationships with each one of them. It’s impossible not to <<. Almost all of his portraits are sentimentally charged objects and it’s obvious that he took great care of them even if the characters portray some kind of dark and eerie aspects. >> It’s a quality of the work that I respect << he says. >> Every time I decide it to do it on purpose it doesn’t work. It happens while I am working on them. Sometimes a moment can be dark <<.

Maurizio’s career is booming and growing and there is no stopping.  In Baltic, he is going to present 25 small portraits from the past, another 12 new pieces of embroidery and four sculptures. He was fortunate to work with great minds like Alexander McQueen and Isabella Blow and confesses that he stayed in London because of the people he met.  He was picked up by Charles Saatchi, and exhibited at his gallery in the exhibition Newspeak: British Art Now, an exhibition that received great coverage and media attention.