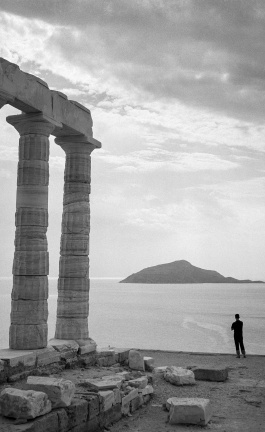 The primacy and plasticity of clay casts an irresistible spell on Australian designer Bruce Rowe, founder of Melbourne-based ceramics studio Anchor. Originally trained as an architect, Rowe’s first contact with ceramic-making took place in 2009, when he had the idea of translating a number of his painting studies into ceramic surfaces. As the designer himself explains in a recent interview, that was the first time he was exposed to ceramics — but was soon taken by the medium’s intuitiveness and hands-on nature, which then led to him to taking evening pottery classes and learning how to throw clay on the wheel. The whole process came rather naturally to him, as he admits that the process felt like remembering an old skill rather than learning a new one. Before long, Rowe found himself in the possession of his own potter’s wheel and studio, an event that marked the founding of Anchor Studio more than six years ago.

Anchor Studio now employs a small team of young professionals, and adheres to some adamant design principles that include sustainable practices. The studio likes to work and produce locally and in collaboration with other small suppliers and workshops, which according to Rowe, functions more as a collaborative network with strong bonds amongst its members: “Anchor relies on the production capacity of a small network of specialist makers to meet the demand for its products, without whom the viability of the business would be threatened. Keeping the studio's production in Australia means we can support these studios to grow as we do”. Quality, longevity and a ‘buy well, buy once’ ethos completes the set of principles that the studio stands for, so it comes as no surprise that timeless, durable and well-made ceramics is what Anchor specialises in. The studio produces ceramic tiles and gardening pots, as one would expect, as well as lighting fixtures in various forms: it’s rather unusual to see pendant lights, sconces or even long tube lights made of clay, but Anchor Studio is well-known for them both in Australia and abroad.

The studio also creates more sculptural pieces, as seen in the recent “Structures” series of ceramic objects that were presented at two separate exhibitions in Melbourne in 2016. Working on the intersection between art, design and architecture, Rowe creates elegant architectural tableaus that look like naïf abstractions of old towns and houses, complete with graceful arches, flights of steps and windows. Coming from an artist who is self-admittedly “motivated by form, quietness, light, materiality and beauty”, these simple objects are indeed understated and architectural in their execution, while possessing a certain aura that makes them look like they have a story to tell —perhaps like fragments from an old Mediterranean town or cliff-hanging village, whose windows and terraces have witnessed the passing of many summers and generations.