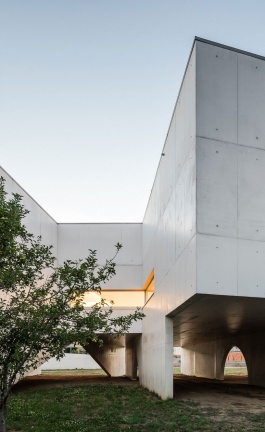 Along the River: The Nadir Afonso Foundation by Álvaro Siza Vieira

Travelers looking for a fun, relaxing escape in Cornwall, UK, need look no further than the newly refurbished Artist Residence, which is housed in a character-filled 17th century, Grade II listed Georgian manor nestled in the old quarter of the sea side town of Penzance. This delightful boutique hotel which first opened its welcoming doors in 2011, is the second hotel from founders Charlotte and Justin Salisbury, the first being in Brighton (2008) followed by a third in Pimlico, London (2014).

The quaintness of its romantic, seaside town location was an inspiring factor in the hotel's renovations and resulted in several charming new additions. These include two new cozy bedrooms in the manor house itself, "The Cottage," located in the hammock filled garden behind the main building, and the transformation of the welcoming bar and lounge, the Cornish Barn, on the manor's ground floor.

The Manor House’s two new bedrooms are the definition of Comfy Luxe, boasting all the elements that any discerning guest yearns for while on vacation -- from room service to luxurious bedding, a super king size or a king size bed to choose from, and the decadent roll-top baths to soak in marvelous Bramley products. Each room also features distinctive quirky touches that set it apart, including art and unique décor elements - such as the reclaimed boards cladding the walls (of one of the bedrooms) whose unique circle pattern is due to the fact that these boards were once used as shelves on which to store wheels of cheese!

Across the garden, the Cottage is filled with an abundance of story book details such as exposed ceiling beams, an overstuffed couch, leather chairs and a stone-faced log burner, not to mention a rustic kitchenette which is always stocked with local delicacies and quilt covered beds in each of the three bedrooms. And true to its name inspiration, the artists' Tracey Emin and Peter Blake prints on display make the Cottage just the sort of place one might dream up when imagining the idyllic nook to unwind with friends and family.

Meanwhile, guests and townsfolk alike who are looking for great food in a relaxed and friendly setting are all invited to the hospitable bar and lounge, the Cornish Barn, for a pint of beer or a glass of wine. On "Festival Friday's" these can even be enjoyed to the beat of local musical talents! But no matter the day, every element -- from the exposed brick walls, to the decadently disheveled velvet sofas; the humorous canine portraits, the jam-jar lighting fixtures, and the wood burning stove -- seem to go out of the way to make patrons feel right at home and to never want to leave (especially not after tasting the food on the menu). As one of the only Smokehouses in West Cornwall, a plate of home smoked BBQ ribs or Fresh Cornish Mackerel shouldn't be missed by anyone!

So… when are you booking your reservations?

The reclaimed boards cladding the walls of one of the bedrooms have a unique circle pattern, due to the fact that these boards were once used as shelves on which to store wheels of cheese.