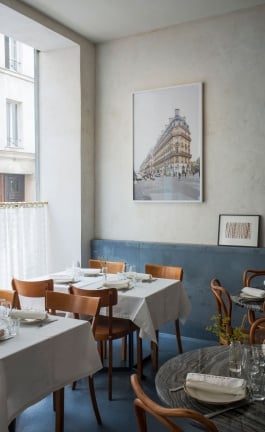 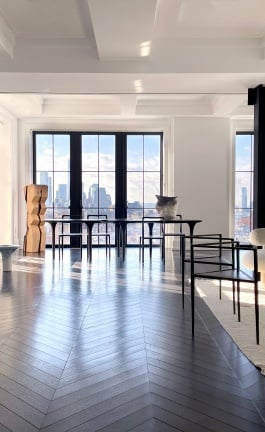 As is often the case, the family house that this couple built for themselves over a decade ago in Krakow, Poland, didn’t keep up with their evolving needs as the years went by resulting in many spaces being underutilised or completely unused. Enter local interior design practice Anke Design Studio who thoroughly renovated the house in accordance with the owners’ current lifestyle and growing family. Interior designer and studio founder Anna Gawlik worked closely with the homeowners, Ania and Krzysztof, radically overhauling the house’s layout and applying a minimalist aesthetic of muted tones and austere materials to achieve coherence and harmony.

Once a jumble of communal, private and work spaces intertwined across all three floors, including a basement level, the new layout clearly separates the house into distinct areas, with the bedrooms on the upper floor, a living and dining area on the ground floor, and Ania’s work studio in the basement. The basement, which has been illuminated with the addition of new windows, also houses a guest room - originally on the ground floor but rarely used – which also functions as a playroom for the couple’s daughter, along with a bathroom with sauna, laundry room and utility spaces. The new layout has freed up the ground floor from unnecessary or underutilised spaces, creating a spacious communal area where the family can now spend most of its time. Centred spatially and symbolically on a fireplace, the space is divided into living and dining areas, with a separated kitchen replacing the original open-plan layout.

Complementing the new layout, a minimalist aesthetic harmoniously unites all the spaces with a muted colour and material palette. Replacing the original oak flooring, whose wear and tear was considerable courtesy of the family’s dog, Leon, industrial concrete has been used throughout the house, including the terrace, while the walls and ceilings are covered with micro concrete whose stucco-like texture imbue the interiors with softness and warmth. White-painted steel ceiling beams subtly trace the original layout without drawing attention. Wall panels and furniture in smoked veneer from recycled oak complement the monochrome palette of white and grey hues, and add mellow accents, as do the natural oak that was used for the new staircase and the limestone cladding the bathrooms. A chipped slab of pale brown marble meanwhile makes for an impressive sculptural wash basin in the guest lavatory.

Despite the interior design’s unabashed austerity, the house is full of personality thanks to an eclectic selection of furnishings, including bespoke pieces by Anke Design Studio, and a soulful collection of decorative objects, books and artworks. In the living room, Ania's literature, art and architecture book collection and Krzysztof's fantasy and science book collection take up an entire wall, courtesy of the sleek, metal-frame floor-to-ceiling bookcase by Gawlik. In the same space, a partially charred wooden coffee table, which has been crafted according to the traditional Japanese method of Shou Sugi Ban, adds darker accents to an otherwise light-coloured interior, as do black armchairs, consoles and floor lamps. Paintings of horses by American painter James McLaughlin Way are mixed with ceramics by Polish ceramist Andrzej Mędrek, a lamp made from an antique vase from Iraq, an early 20th century wooden toy horse from Silesia, and other vintage finds from Krakow's hip Kazimierz neighbourhood.

In the adjoining dining room, a massive oak table, again custom-designed by Anke Design Studio is juxtaposed with an ethereal light pendant by Bocci made from thin porcelain diffusers creating a powerful centrepiece and eschewing the need for other decorations. Gawlik has also taken care to give a new lease of life to much of the house’s original furniture, recycling household appliances and fittings as much as possible, a laborious process that attests to the designer’s sustainability focus as well as her meticulous design process.