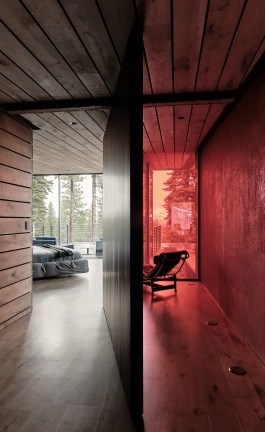 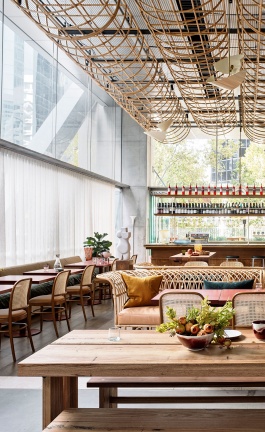 Located just off Market Square in Wrocław’s centre, Biggy is a new burger and pizza bar that pulls no punches when it comes to design. Inspired by the freestyle verve of hip-hop, local practice BUCK.STUDIO drew from 1990s American street culture, 1970s psychedelic art and contemporary minimalism to playfully create a venue that is in equal parts modern and post-modern. Swathed in a high-voltage palette of primary colours, the restaurant’s zany interior reflects the causal vibe of its street food offerings while offering a visual respite to the classical grandeur of the town’s medieval character.

In response to the property’s elongated floorplan, BUCK.STUDIO introduced steel mesh screens to divide the space into distinct eating zones without compromising its openness. Rendered in electric pink, red and blue, the playful partitions separate a sit-down section from counter seats. While the latter feature slender tripod stools, the former comprise two-person tables aligned along banquette seating whose dark blue and white grid upholstery echoes the light blue and red square wall tiling. With a mirrored wall at the far end of the space doubling its length, the deluge of colours and geometric patterns reverberate into an immersive experience.

The rectilinear language and rigid rhythm of the square tiling and steel partitions are juxtaposed with the psychedelic flooring, which appears littered with confetti, and the graffiti-like neon signs by Łukasz Wojciechowski which convey whimsical quips like ‘Cheesus walks with me’ and ‘Legalise marinara’. Add in the restaurant’s hip-hop soundtrack, vintage video game machine, and servings of fluffy, mouth-watering Detroit-style pizza (fittingly cut in square slices), juicy burgers and craft beers, and you get an idea of Biggy’s popularity among young people.