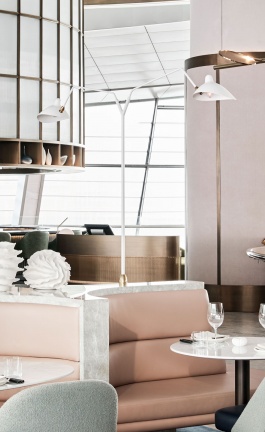 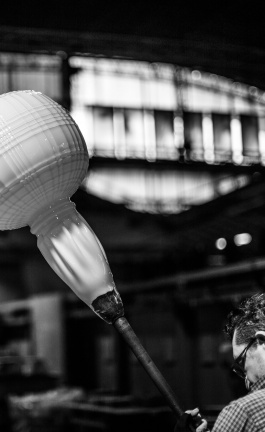 Geometric lines and unexpected elements feature prominently in the new coffee spot, Black Drop, which is located in the center of Kavala, a city in northern Greece. Designed and realized by Ark4lab of Architecture - led by Giorgos Tyrothoulakis and Evdokia Voudouri - as a "coffee experience," the space merges urban contemporary touches with industrial aesthetics, offering patrons a fresh option through which to satisfy their caffeine desires!

Before even entering, one catches a glimpse of baristas preparing the dark drink through the panned glass window at the far right of the space. Behind the brewing and cooking accoutrements of the kitchen glistens a wall made up of copper sheeting, in a rich geometric pattern; like a large, flat sculpture playing with mutely reflected light.

The terrazzo flooring and sheathing over the bar bring an almost old-world, homey element to the interior, while the exposed cement beams on the ceiling and walls add the afore mentioned undone, "industrial" touch.

To the left of the bar is the show stopping hefty, wooden platform built on successive levels, much like the stands at a stadium or outdoor theater. The intention is twofold: to encourage the interaction of the inside with the out since it faces the bustling "Kapnergaton" Square outside, as well as to promote the interaction of patrons who are already inside the café - for what faster way is there to meet somebody new than to excuse yourself as you walk up next to them holding a steaming cup of jo?

There's more to look at further inside. One wall is covered in a "collage" of sorts featuring traditional tiles of juxtaposing patterns. Meanwhile, a shiny/matte sculpture of a rhinoceros hangs from the ceiling - and seems perfectly at-home in the geometrically rich patterns of the interior. Comfortable sofas and chairs are interspersed throughout, offering many spots and nooks where patrons can experience this unique and thoroughly welcoming setting.