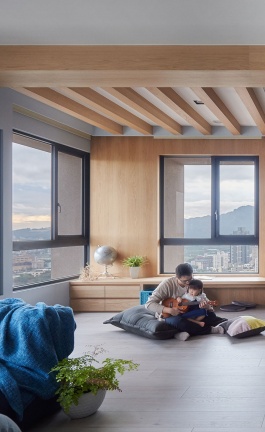 Photo by Patric Johansson, Styling by Myrica Bergqvist, Courtesy of My Residence Magazine and Aller Media.

From Swedish interiors magazine Residence and its stellar editor-in-chief Hanna Nova Beatrice comes a new annual “bookazine” titled My Residence, featuring a selection of Swedish homes as seen in the magazine. As a sneak peek from inside the book we present here an article in partnership with Residence, about the summer house architect Buster Delin built himself in the Swedish countryside.

Buster Delin’s holiday home is like a collector’s box filled with family memories and the surrounding industrial history. “I wanted to build something modern which at the same time fitted the location,” he says. “It also needed to be doable from a structural engineering perspective. A house must not be overly contrived. I haven’t got a system or certain style, I always follow my gut feeling.” He quotes the Polish-born architect Léonie Geisendorf, who worked in Sweden for many years: “One should seize the idea while it’s still damp.”

Photo by Patric Johansson, Styling by Myrica Bergqvist, Courtesy of My Residence Magazine and Aller Media.

The idea was to build a summer home, and a house to show clients, but primarily a place that revives the family estate of Lundnäs, outside Arbrå in Hälsingland. Now part of a new generation, four children run in and out of the house – this has always been the land of summer holidays, filled with playgrounds and mysteries.

“I wanted to make something long lasting and durable,” says Delin. “The design has evolved from the conditions of the site. The granite, the brick, the tarred wood and white rendering bear kinship with the other buildings on the property. Traditional Japanese houses have been my primary source of inspiration when it comes to wood construction, and the feeling of Louisiana outside Copenhagen has been a vision that I’ve had for a long time, along with the Japanese garden in Norrviken in Sweden.”

The house took five years to build, and Delin built it largely by himself, making payments gradually without taking out any loans. He has shown that with the right touch and plenty of time, a project like this is possible. The house is a work of art.

“This place is my base and I always come back here with my family,” says Delin, who lives with his wife and children in an apartment in central Stockholm. He grew up in one of Stockholm’s most beautiful homes, Villa Delin – also known as ‘the Bunker’ or ‘the Concrete House’ – designed by Geisendorf, who worked with Le Corbusier.

Delin’s early career was dedicated to mountain climbing and he ran a shop supplying climbing equipment. Eventually he began experimenting with packaging design and attended the design programme at Beckmans Academy in Stockholm, run by architects Jonas Bohlin and Thomas Sandell. He finally chose to focus on architecture and started to design interiors, shops and apartments. Five years ago, he designed a small, charming house for his mother. Situated in a garden created by his landscape architect sister Marika Delin, it received good press coverage, prompting more private commissions.

Delin now runs his own practice, with several private houses in the making, including a summerhouse on the island of Vättersö, as well as the Zibetto coffee bar in New York. His most important house, however, is here, firmly rooted in its place. The surroundings flood through the membranes of the glass walls – the forest, the summers, eras gone by and those still to come.