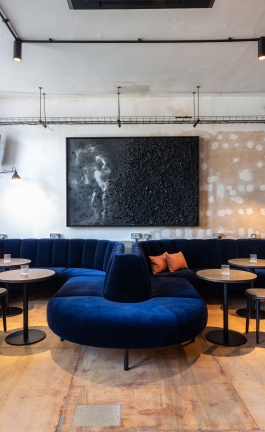 When Italian sisters Claudia and Elisa embarked upon transforming Podere Bussolaio, a dilapidated 15th century farmhouse in the Tuscan village of Travalle near Florence, Italy, into a contemporary country home for their two families, they had no illusion about the difficulty of their endeavour. The existing structures were in very poor condition suffering from widespread damp, collapsed roofs and unstable floors; but that only made them more determined. Three years later, Casa Claudia and Casa Elisa have emerged as a paradigm for contemporary family living in historic settings. Masterminded by Florence-based studio b-arch architettura, the two houses have their own distinct personalities but share the same architectural sensibility that seamlessly blends past and present, vernacular and modern, and communal and private, into a design of authentic sophistication.

The renovation of the farm’s existing buildings, some of which had been left abandoned while others were being used by an artist for storage and a butcher producing salami and prosciutto, was underpinned by a desire to preserve their authentic character albeit without sacrificing the comforts of a modern home. The process was long and arduous: wooden roofs had to be rebuilt from scratch, crumbling masonry structures restored using stones found on site, and plaster surfaces re-created by hand based on traditional techniques. Meanwhile, more recent additions that clashed with the estate’s vernacular aesthetic were replaced with new blocks dressed in timber slats which serve to harmoniously complement the age-old buildings without imitating them.

The two sisters’ houses share a communal outdoors area centered on a gracious swimming pool with adjoining pavilions housing dressing rooms and a gym, where the two families can come together to socialize and have fun, while a series of private gardens and intimate courtyards ensures that each family has its privacy both indoors and outdoors.

Although Casa Elisa and Casa Claudia share the same architectural canvas, they differ in both layout and décor. Whereas in Elisa’s home the kitchen serves as the heart of the house, in Claudia and her husband Marco’s house, which occupies the farm’s old barn, this role is bestowed upon the living and dining room, while the adjoining kitchen is treated as place of passage rather than socializing. Designed as a spacious, light-filled space, Casa Claudia’s living room has been opened up to the surrounding landscape by the addition of large glazed openings, some of which have been filled in with brick latticework that filters in the daylight, provides solar shading and pays tribute to the original masonry facades.

Casa Claudia’s interiors elegantly combine natural with man-made materials, and rough with smooth textures, in order to strike a balance between the rustic heritage of the property and a contemporary ambience that represents the fashion-conscious, well-travelled young family of three. Glistening resin floors and smooth black steel surfaces are masterfully interweaved with stone masonry and exposed concrete, while a series of bespoke furniture that the architects have designed for the project—which range from a concrete and iron console in the living room and a steel bookcase in the boudoir, to the elliptical glass and iron dining table and the elegant brass-legged chairs manufactured by Tosconova—further enhance the creative dialogue between materials.

The owners’ personality and taste is also reflected in the eclectic selection of furniture that mixes mid-century pieces such as Knoll’s Planter arm chair and Maison Rougier’s quirky lounge chair in black and white wool bouclé fabric, with vintage finds such as an Art Deco cabinet turned into wash-basin, an antique Chinese lacquered table from the 1900s used as a bedside table, two modernist Murano glass chandeliers, and a brass framed bed from the 1970s, as well as contemporary classics like the versatile Extra Wall sofa in soft brown leather by Piero Lissoni for Living Divani and a stainless steel kitchen by Boffi. Meanwhile, a ceramic installation of twenty unique hearts by Faenza-based FOS Ceramich in the bathroom evocatively illustrates that home is where the heart is.