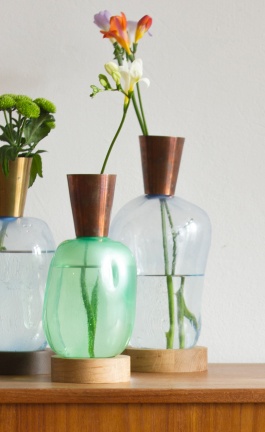 BLOW It Up! Handmade Plastic Vases Made Easy By Studio Ruben der Kinderen

Eiko Ojala, an illustrator and graphic designer from Estonia, gives a new meaning to cutting-edge digital illustration, by combining the warmth and texture of traditional materials with the technical and expressive potential made possible by digital design tools. He creates illustrations depicting landscapes, portraits and cartoon-like figures through the use of an illustration technique that combines real paper-cut patterns with digital editing. Ojala doesn’t use 3D software to create his images; instead, he creates a trompe-l’oeil of three-dimensional depth by hand, through a careful study of form and shadow, and a minimalist approach to illustration. Looking at his illustrations, it’s hard to tell which ones are made from real paper and which ones are not!  His colourful and humorous artworks seem to bring to life a whole world inhabited by curious characters, whilst keeping the disarming, almost naive character of hand-made paper collages intact.

Eiko Ojala was born in 1982 in Tallinn, Estonia. Before entering the world of illustration, he studied interior design. His work has appeared on numerous book covers, and his clientele includes The New York Times, the V&A Museum, Wired magazine and the Harvard Business Review.