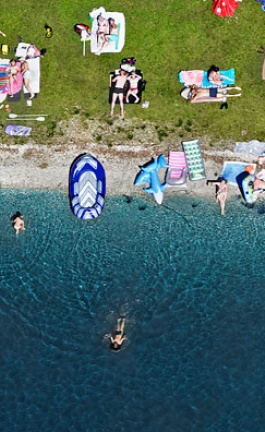 Now you have two major reasons to visit Paris! The first is the retrospective exhibition devoted to the great American artist, Diane Arbus (1923-1971) at the Jeu de Paume (18 October 2011 to 05 February 2012). The second is ''Christmas: Dreams of far away'' which is taking place at the famous Printemps store in Paris (from 9 November 2011 to 7 January 2012). In essence, this work, an exhibition in its own right, is made up of eleven window displays all dreamed up by the Maison CHANEL and more precisely by Mr. Karl Lagerfeld himself.

Yatzer was there to capture the moment when all of the windows were unveiled in front of hundreds of pairs of eyes which had been waiting in anticipation and had in fact blocked the entire district around the famous store. Mr. Karl Lagerfeld, accompanied by his muse Vanessa Paradis, soon arrived in order to cut the silver ribbon thereby opening the 'curtains' to let viewers view the journey around the world that was about to begin.

The world that emerged comprised of eleven windows. Eleven sources of inspiration and legendary destinations form part of CHANEL's history which have given rise to some of the most unique collections in the world, dedicated to Arts and Crafts and the Cruise Collections.  In strolling past the Printemps store on the Boulevard Haussmann in the IX arrondissement in Paris, you now have the opportunity to travel simultaneously to far flung destinations such as Los Angeles, London, Paris, New York, the Byzantium, Biarritz, Moscow, Venice, Shanghai, Tokyo and the Cap d'Antibes. The talk of the town was of course that which was closest to the onlookers’ hearts... Paris. The most romantic city in the world was represented by the most iconic of Parisian personalities, Mr. Karl Lagerfeld himself, whose photographic talent is visible throughout the window display and furthermore through the ten small marionettes depicting Karl, designed by the French marionette maker Jean-Claude Dehix.  Some of the French capital’s most famous landmarks, including the Eiffel Tower, the Place Vendôme, the Arc de Triomphe and the Printemps store itself, are also depicted.

One simply cannot ignore the 1728 meters of fairy lights and the further 600 meters of light chains whilst traversing Boulevard Haussmann’s pavement. The facade of the entire Printemps building is covered with a plethora of stars, glitter and snowflakes that twinkle and dance throughout the day well into the night where the building’s outstanding Haussmann architectural elements (recently restored) have been highlighted by beams of red light that bring them alive. Furthermore, the famous letters spelling out CHANEL shining on the face of the façade, make for an unforgettable signature that makes it impossible to ignore this collaboration even from kilometers away!

The emblem of Gabrielle Chanel, the Camelia flower, the Rue Gambon's most symbolic accessory which evokes the spirit of CHANEL all over the world, is revisited in elements of tweed, satin, fur as well as more unexpected materials such as newspaper, plastic and cardboard.  Search for its blooming reinterpretations in the most colourful and extraordinary tour of the world in only 100 steps!