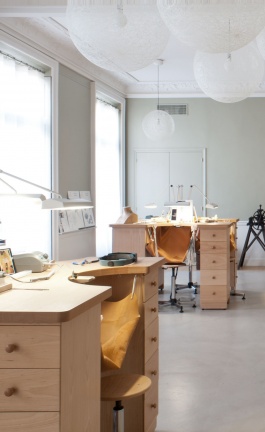 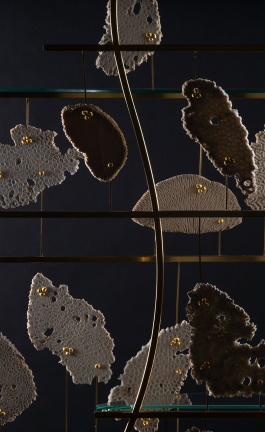 The evocative product design brand, Ginger & Jagger, was born in 2012 when it’s CEO and Creative Director, interior designer, Paula Sousa, realized that satisfying a personal longing would also fill a void in the market. Hence, the love story between two characters, Ginger and Jagger, took root. It was a tale of wanderlust, which presented a new, handcrafted narrative to both inspire people and envelop them in a story that is as timeless as the natural elements behind the items produced. “Our design [aesthetic] has a larger spectrum than the products themselves. It’s part of a narrative. We try to capture a feeling through the stories and the products tell their pathos,” Paula says. And from April 12 – 17, 2016 these will be presented at Salone del Mobile in Milan (Pavilion 6, Stand E42).

Each of the brand’s stunning large scale items, which take a single artisan many weeks of handcrafting to produce, is a functional work of art; a masterpiece constructed not just with respect to nature but based on nature. This is sometimes literal-such as the Magnolia Sideboard which is factually resting on a brass casted magnolia branch - and sometimes figurative - such as the Halo Console which encapsulates the movement of raging waves in the circular hand-hammered brass base and clear acrylic top.

When we asked about the design process, Paula shared that it’s a collective effort for herself, her design team and the artisans who hand-craft the items, to bring together textures and shapes that inspire a piece. “We find wood, rocks, leaves or things that make us feel a certain way. Sometimes it’s just a picture of something or the ‘feel’ of a scene in a particular film,” she shares. Indeed, at times, they have gone out looking for specific natural items such as vines or magnolia branches because they want to work with a specific texture or “format” for a design. But the one thing they never do is bend nature to fit a design. “It’s the other way around,” Paula says. “We apply functionality to something pre-existent.”

Ginger & Jagger was destined for success from the start; the first brass casting of a fig tree branch used to create the Fig Tree Console has gone on to become one of the brand’s most iconic pieces to date, showcased as the statement item in a number of hotels and private residences worldwide. “Trees have been the basis of objects made by man ever since we started making things,” says Paula. “They evoke an ancient feeling of belonging but are very contemporary at the same time.”

It’s no surprise that customers experience a bond with not only the Ginger & Jagger designs but the earthy materials used in their production, such as wood, marble, brass and copper. “People become enamored with the inspirational story behind the creative process,” Paula shares. “The stimulation of the senses that we go for emanates our ethos and spirit.” This is also in thanks to the romantic fact that all of the natural elements used in the design process are sourced from the Porto area of Portugal which is also where the brand is based. “In our globalized world people need this connection with authentic things made by passionate people,” Paula tells us when we ask her how important it is for her to keep their production so localized. “People from Porto have the most intense relationship with the city. If we leave [it] at some point within our lifetimes, we always end up returning. It’s the people, the food, the sea, the river, the light, the rhythm…The energy is unmistakable.”

Even the brand’s conceptual photos reflect the unique ties that Ginger & Jagger items share with their environment which were all taken in 2015 at a marble pit in Estremoz and in an abandoned metal mine in Sao Domingos, both of which are in Portugal’s Alentejo area. Hence, the marble Fractal Sideboard practically blends into the marble walls of the quarry as does the Pearl Wall Lamp and all the other items featured in the remarkable images. The striking results cause one to do a double take in order to discern the items from their origins. “The idea was to shoot the Nature inspired designs from Ginger & Jagger in scenarios related to the materials that are central to the aesthetic and design canon of the brand,” Paula shares.

Continuously sought out by an influential fan base, today Ginger & Jagger’s distinctly beautiful, tangible qualities and designs can currently be admired in Dior boutiques worldwide - in Vienna, Sydney, Singapore, Kuala Lumpur, Kuwait and Frankfurt. Paula says that she believes the French design house identified with the core values of Ginger & Jagger, their craftsmanship, their use of noble materials and, of course, their designs. After all, whether crafted with silk stitching or brass casting, haute couture is haute couture and each of Ginger & Jagger’s pieces is literally tailor made with a single customer in mind. “Our products take weeks to make,” says Paula. “They are made to order, so they are made especially for the customer. Waiting for something makes one desire it more, I think.  Knowing that one artisan made a mold of a vine branch, crafted small sections in brass and welded them by hand just for you is a thrilling thought.”

The incredible, sculptural pieces that the fictional, Jagger, crafts for his love, Ginger, are conceived by Paula and her team to be, “something that you will notice, but with a sense of grace,” she shares, adding: “No one is eternal, we’re aware of that,” Paula says. “But one should try to leave a mark, to create something good, something beautiful. If it ends up lasting forever, mission accomplished.” Andin the happy-ever-after world of Ginger & Jagger, this mission is indeed accomplished.