"It’s all about looking out"... The Olson Cabin in Longbranch, Washington 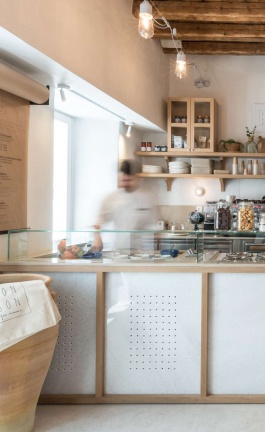 Although Gucci's new fragrance BLOOM is named simply,  there is nothing remotely simplistic about it. Blended by master perfumer, Alberto Morillas, under the direction of Gucci's Creative Director, Allesandro Michele, the fragrance is a heady blend of countless flowers and wearing it is enough to make its wearer - and anybody else in close proximity - daydream that they are taking a walk through a verdant, blooming garden.

Unsurprisingly, this is exactly the script given to the three muses of the fragrance - actress, Dakota Johnson, actress and model, Hari Nef, and artist, Petra Collins - who are starring in the day-dreamy campaign film shot by Glen Luchford in a fantastical English garden, having tea on a sidewalk flourishing with blooms, walking in an apartment overgrown with verdant plants, and swimming at dusk in a lake entangled with shimmering flowers and reeds. Accompanied by the haunting, emotional melody of Portishead's, The Rip, the film - Yatzer was please to have been invited for a sneak peak viewing in New York City in May 2017 - rhythmically unfolds through a series of dream-like images, just the way the fragrance itself was created to gently "unfold" on the skin of its wearer.

Gucci Bloom: The Campaign Film
“I wanted a rich white floral fragrance, a courageous scent that transports you to a vast garden filled with many flowers and plants, a bouquet of abundance. The garden is as beautiful as women are; colorful, wild, diverse, where there is everything,” Alessandro Michele. Presenting the Gucci Bloom film campaign, directed by Glen Luchford and starring Dakota Johnson, Hari Nef and Petra Collins.
Music: ‘The Rip’ by Portishead, Universal Island Records.

As she walks in the room
Scented and tall
Hesitating once more
And as I take on myself
And the bitterness I felt
I realize that love flows
Wild, white horses
They will take me away
And the tenderness I feel
Will send the dark underneath
Will I follow?

"The commercial is layered, like all women are," Petra Collins told us when we met to discuss her involvement in the campaign. "We're not one dimensional characters; we all have a little dark side to us, not just a light side," she said with a smile. Petra has, in fact, been described as Gucci Bloom's "symbol of vitality" and after speaking we can't help but imagine that Allesandro must have made up his mind about her from the first time they met two years ago, when Petra walked in his Fall/Winter '16 show. "I was very lucky to have first met him in his studio, because that was like an introduction into his mind," Petra told us. "Allesandro loves strong people and really respects artists. I think that in Hari, Dakota and myself, he saw three strong women who are doing something different in their respective fields; I think that's what excited him about each of us."

As far as filming the commercial went, Petra told us that one of the reasons it is so believable is because the three women were already friends. "That’s why it was so fun to film; because it was literally three friends hanging out! This is why I think the ad feels so sweet and intimate and special - we were actually having fun!" In truth, the advertisement is a beautiful piece of filmmaking - and quite a departure from the hyper-sexualized advertisements that are usually associated with fragrances - and we can't help but comment that, while watching it, you almost smell the fragrance notes wafting through the strong visuals.

Another strong point to the fragrance itself is that, although it comes in a powder pink, lacquered porcelain, bottle and is modelled by three women wearing flowing clothes in a luxuriant garden, the scent isn't genre specific. "That's another reason it's so special and exciting - a grandpa can wear it, my little sister, myself… literally, anyone can," Petra told us adding that although she actually never usually wears perfume because fragrances usually "take over and aren't tailored to each individual personality," Bloom is different. "It feels like it’s a part of me and not like I've put on something in order to become somebody else." That's what people are looking for nowadays when choosing a fragrance: something that will make them feel like the best version of themselves.

We're not one dimensional characters; we all have a little dark side to us, not just a light side.

The Notes of Gucci Bloom
A look at the notes that create a new olfactory narrative for scent Gucci Bloom by Alessandro Michele. Tuberose absolute harvested from India is interlaced with Jasmine bud extract to leave a fresh petal scent on the skin. Rangoon Creeper, used in fragrance-making for the first time, is from South India and changes from white to pink to red when it blooms with a slightly powdery, floral perfume.
Music: ‘Schoolhouse’ by Oliver Coates & Mica Levi, Slip Records.

In truth, by way of fragrance making magic, perfumer Alberto Morillas honed in on his 45 years as a perfumer and managed to concoct a scent bearing two types of Jasmine Sambac and Tuberose, balanced by musk - "a simple formula with a complex materiality" as Alberto said adding that it's actually the most expensive formula he's created although the perfume's shelf price doesn't reflect this. It quite literally seems to change depending on the person who wears it. Gucci BLOOM also features notes of another plant used in perfume making for the first time, the Rangoon Creeper - discovered in South India, it embodies the new scent’s concept and name, as it changes color from white, gradually darkens to pink then finally to red when it blooms.  "It's a dream. Alessandro didn't want a 'marketing' perfume, he wanted an 'emotional' perfume," Alberto shared with us, adding that the entire process, from first creative meeting to completion, took just a year.

"Allesandro is a typical creator. He wanted to have emotion in the perfume so that when one smells it they immediately get the impression of walking in a garden in the early morning, complete with green leaves and flowers blooming… just like in the film,” Alberto said, describing Gucci's Creative Director as "a magic man who gives a lot from his soul."

Perhaps this is why so many of the characteristics that Allesandro chose for this fragrance, from the notes, to the bottle, are so perfectly on trend; Pantone's Color of the Year is Greenery, while one of the design world's prominent colours for 2017 also happens to be pink, just like the square bottle. However, this is an unsurprising "happenstance" considering that Gucci is one of the most esteemed fashion companies worldwide and Mr. Michele one of the industry's most admired creators.

Allesandro is a typical creator. He wanted to have emotion in the perfume so that when one smells it they immediately get the impression of walking in a garden in the early morning, complete with green leaves and flowers blooming… just like in the film.

On Set with Gucci Bloom
Behind the scenes: bringing to life the idea of Gucci Bloom, in a campaign starring Dakota Johnson, Hari Nef and Petra Collins. They are captured in a day in the city, where the surrounding urbanity turns into an imaginary stroll in an English garden. The trio take tea on a sidewalk flourishing with blooms, walk in an apartment overgrown with plants and swim at dusk in a lake entangled with shimmering flowers and reeds.
Music: ‘Schoolhouse’ by Oliver Coates & Mica Levi, Slip Records.

Frankly, fragrance is the perfect puzzle piece to weave into the company's already elaborate fabric. Petra Collins, who has a retrospective book of her work coming out with Rizzoli in October, agreed. "I think it [fragrance] is important because it's a different medium. Clothing is so visual, whereas this is sensory. It evokes a memory and an emotion. I think it's key [to the company] because it [completes] the whole person."

We couldn't help ourselves and so asked Alberto what notes he'd choose if he were asked to create a scent that described the concept of 'love.' "It depends on if one's eyes are open or closed," he said mischievously, after some thought however concluding: "Love to me would smell like musk. Because the warmth of one's skin coupled with the chemical reaction make an expression of one's sensibilities, of one's life. And it is through a combination of musks that we can express the scent of life."

In other words, the fragrance would smell a lot like Gucci Bloom.