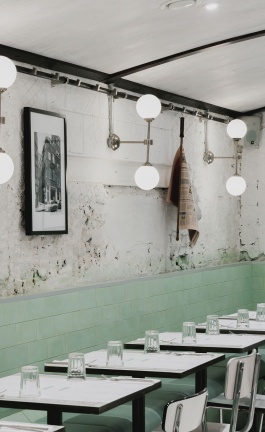 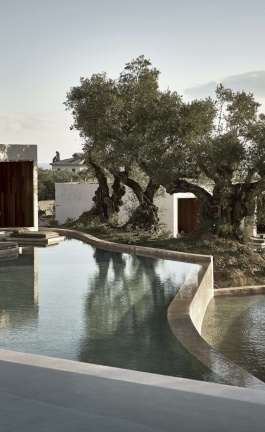 Looking at the images of this recently refurbished Parisian apartment by Paris and London-based French designer Guillaume Alan, you will be surprised to learn that despite their monochromatic appearance they are not in fact black and white photographs but the result of Alan’s poetic design ethos. Completely eschewing the use of colour, Alan has relied instead on a nuanced palette of white and grey shades in order to transform the grand, 19th-century Haussmannian residence into a sanctuary of spatial purity and refined elegance. Underpinned by a boldly minimalist sensibility, the designer’s monochromatic approach, far from producing a uniform environment, has created a lyrical interplay of light, depth and textures, “giving birth”, as the designer says, “to a universe of serenity, calmness, and emotion”.

"Simplicity is the ultimate sophistication" Leonardo da Vinci famously said and Alan’s interiors meticulously adhere to the old master’s adage. Discreet, geometrical lines produce strictly defined, uncluttered spaces imbued with an architectural purity and sculptural finesse. In the designer’s words, “the project is pure, flawless, and harmonious. When you enter and discover, you’ll find that every element was carefully considered—the architecture, the light, the floor, the materials used, the palette, the furniture pieces are all perfectly linked”.

Blessed with expansive views of the Seine and the Eiffel Tower, the apartment’s exclusive use of one tone, which the designer calls “craie” or chalk in English, creates a bleached interior scenography that both enhances the city vistas by turning the windows into painterly canvases, and promotes an illusion of space. The monochromatic, pared-down décor allows the eclectic textures that Alan has assembled to come into sharp relief. Just like the human eye adapts to low illumination levels by differentiating between shapes, the colourless environment sharpens textural perception. Light gray brushed-oak floors, natural marbles, brushed-ash wood, raw linens, soft leathers, silks, and wools comprise a masterfully crafted, harmonious composition that envelopes the occupants in luxuriant softness.

Alan’s holistic approach to interior design, which includes creating his own wall paints and commissioning bespoke upholstery fabrics, extends to the furniture selection with most pieces coming from his own Guillaume Alan Collection. Based on his love for natural materials and rich textures, his minimalist furniture designs, such as the upholstered satin chaise-long and matching armchairs in the living room, are characterized by a timeless elegance. The project also includes custom-made pieces like the dining room chairs, which were inspired by vintage Chinese armchairs, and the Corian-topped dining table which is balanced by textured brushed-ash wood. With every detail as meticulously thought through as these pieces, it is no wonder that the result is an apartment of immaculate perfection, poised luxury and effusive harmony.