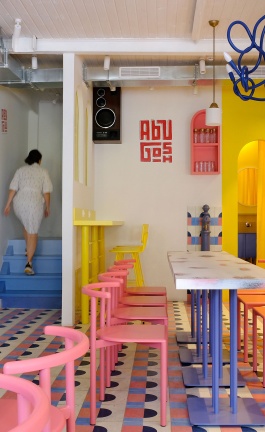 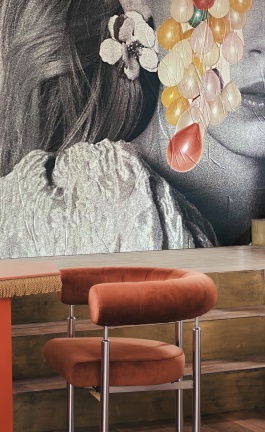 For interior designers, renovating historic buildings by iconic architects is both a privilege and challenge as they have to carefully tiptoe between paying homage to the project’s original author and leaving their own mark whilst at the same time adapting them to contemporary living standards. For an example of such a high-stakes project look no further than the recent renovation of Hailey House in Los Angeles; designed by Richard Neutra, the quintessential architect of Californian mid-century modernism, the house was recently revamped by Los Angeles-based artist and interior decorator Anthony Barsoumian in collaboration with restoration team Andrew Gray Studio and project manager Barbara Lamprecht.

Barsoumian has artfully complemented Neutra’s rectilinear design language with curved lines and organic forms that introduce a romantic sensibility without detracting from the building’s clean-cut and airy elegance. A handpicked selection of modernist furniture, lighting and objects from the 1950s and 1960s by American and European designers further attests to Barsoumian’s heightened attention to detail while nostalgically celebrating the house’s mid-century bona fides.

More than any other mid-century architect, Richard Neutra is most closely associated with California Modernism, as the architect that both introduced modernism to California and popularized it having inspired countless other architects with his masterful integration of Bauhaus modernism and Southern Californian building traditions. Although Neutra completed numerous commercial and cultural buildings, he’s best known for the houses that he designed – all paradigms of crisp modernism and aspirational design, imbued with timeless appeal. Hailey House might not be one of Neutra’s most famous residences but it features all the architectural hallmarks of his practice, from the clean, crip lines, walls of glass, and open plan layout, to the built-in furniture and bespoke cabinetry and the intimate connection between interior and exterior.

Perched on a steep hillside in Los Angeles’ Hollywood Hills neighbourhood, Hailey House was designed as a low-slung, flat-surfaced, pavilion-like structure, one that is harmoniously integrated into the surrounding natural landscape with expansive windows and open-plan living areas making for spacious interiors despite a compact footprint. A decked balcony overlooking the rolling hills further enhances the sense of openness and lightness. Built in 1959, the house has had three owners, who luckily never intervened with its design in any significant way, before being snapped up by creative director Patrick O’Neill who commissioned Barsoumian to update the interiors.

Born and raised in Pasadena, California, Barsoumian was naturally influenced by Los Angeles-based architectural masters such as Elmer Grey, Paul Williams, John Lautner and Richard Neutra so this project was right up his alley. In fact, what makes his intervention so successful is as much as what he altered as what he left intact. Neutra’s signature open-plan layout, which brings together the living room, dining area, kitchen and den, has been preserved, as has all of the mahogany and redwood woodwork and cabinetry which was meticulously restored to its original state. The same is true for Neutra’s numerous built-in features such as the living room sofa, which abuts the floating fireplace (another one of Neutra’s signatures), the recessed vintage TV set (which has been restored for use), and queen-sized bed.

While Neutra’s architecture revels in straight lines and cubic forms, Barsoumian has cleverly introduced a subtle vocabulary of gentle curves and organic forms through an eclectic collection of furniture and objects. In the living room, a kidney bean-shaped coffee table by American pioneering modernist designer Gilbert Rohde is accompanied by the soft textures of a brown leather patchwork ottoman by Swiss historic brand DeSede and a black calf skin armchair by the late American designer Milo Baughman, while a 1960’s bronze light sculpture by Swedish architects and designers Tom Ahlstrom and Hans Ehrlich adds abstract, organic shapes.

In the adjacent dining area, an oval black lacquered Italian table is paired with a set of six Medea chairs by mid-century Italian designer Vittorio Nobili, both from the 1950s, while a rare rolling bar cart by Italian architect Ico Parisi, also from the 1950s, stands out with its prismatic shape. A curved sectional Swan sofa by American modernist master Vladimir Kagan in the den further enhances Barsoumian’s roster of sinuous highlights.

The designer’s boldest intervention however can be found in the kitchen where Barsoumian has replaced the original Masonite slide cabinet doors with smoked glass and applied a darker stain to the cork flooring that echoes the black rafters and makes Neutra’s yellow Formica and elmwood counters stand out, as well as added a mirrored backsplash to add natural light and views. The restored original appliances enhance the sense of nostalgic sophistication as do further additions such as the Eames speaker in the den, the iconic totem-like bedside lamp by Italian designer Bobo Piccoli for Fontana Arte, and Danish modernist designer Hans Wegner’s Flag Halyard chairs outside on the terrace. Such a carefully choreographed ensemble of unique vintage pieces ultimately heightens Neutra’s crisp modernism and enhances Haley House’s mid-century sensibility whilst imbuing the property with a contemporary vibe of stylish eclecticism.