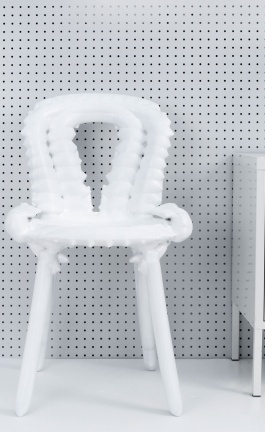 The Future of Furniture: Breeding Chairs 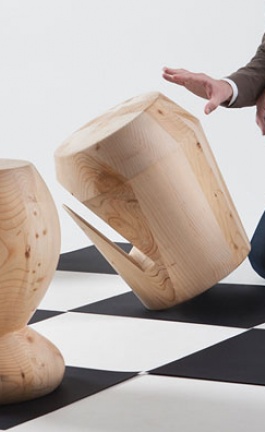 Chessmen Inspire A Family Of Stools by Giorgio Bonaguro

As I walked through hundreds of strategically placed thick black threads along the walls of an abandoned building that was all but ready to collapse, all I could do was wonder where they might lead me. But my curiosity propelled me forward along the building’s narrow corridors, along a totally black carpet, until I reached the end – and entered the most unique dining setting imaginable (video preview). Aimed at increasing the appetite, not only with the impromptu cooking sessions that were about to take place but also providing a taster of what was about to happen during the next days, this was it, ... my first impression after my arrival to the Chinese capital which would prepare me for a journey into the unexpected... to the multitude of unique events that took place during Beijing Design Week from the 28th of September till the 6th of October 2013.

The image I've just described is ''LÇo shù kÄi xÄ«n huÄ'' (Eng: Old Tree - New Blossoms), the spatial installation by reMIX studio in a space destined to become part of The Orchid Hotel located on 38 Paizi Hutong in Beijing’s Dashilar area. And for all of you who may be wondering exactly what a ''hutong'' is,  hutongs are ancient narrow alleyways that used to connect different courtyard residencies in old Beijing city. Having witnessed the passage of time for hundreds of years, during BJDW they witnessed the passage of design aficionados from all around the world who had made the pilgrimage to Beijing to discover ''Dashilar Alley'' - arguably the most dynamic section of Beijing Design Week followed by ''CCD/The Community'' in Caochangdi Art Village and the ''751 Industrial Park''. And the reason?  To explore the series of projects, events, exhibitions and installations on display inside and outside of the almost collapsing traditional dwellings of the Dashilar area dating from the Ming Dynasty (1368-1644); some of which are begging for renovation.  For this purpose, Beijing Dashilar Investment Limited (BDI) and BJDW 2013 launched Dashilar Pilot, inviting top international and local designers, architects, academics and professionals to think through the regeneration of this historic district which seems to have been left out in the cold in the otherwise fast paced modernization of the whole city. Some of the long term renovation projects include the "Micro-Hutong" building experiment by Standard Architecture on the Yangmeizhu Hutong, Michael Young’s striking re-imagination of the traditional hutong toilet which aims to improve the neighborhood’s facilities and Matali Crasset's ''Unlimited Hutong'' renovation proposal on 6 Cha'er Hutong, an open house for all of its inhabitants to socialize and experiment with creative activities while young designers in residence will interact with the local community. Finally, ''Re-up'' the first project by designer and entrepreneur Lin Lin ç³ç³ of Jellymon together with Spoonful of Sugar which is scheduled to open in November 2013 aiming to ''Re-up'' the entire Dashilar neighbourhood through the creation of a holistic upcycle-themed food & beverage and retail space inside a former electrical-relay device factory in a historic art-deco building on 59 Tie shu Xie Jie Hutong.

Other exhibits included the Dutch design agency SALON, founded in July 2010 by Gijs Stork and Manon Schaa, who invited 10 Dutch designers to explore the Dashilar area and take over specific dwellings in collaboration with 10 Chinese designers in order to present their collaborative projects as part of the Amsterdam Guest City Program (initiated in London in 2011 and Milan in 2012). My favorite was the collaboration between Dutch designer Sander Wassink and local shoemakers who gave both a new life and style to old, ugly shoes after an intense surgery process that was definitely worth observing to see the end result: reborn shoes that were worth wearing!

The design of everyday objects in Russia and China from the 1950’s to 1980’s was the main subject of the COMMON OBJECTS exhibition curated by Peipei Han and Evgenia Novgorodova which was brought to BJDW by the Moscow Design Museum at Dashilar's FACTORY on 8 Dawailangying Hutong. Other exhibitions also took place in the same building on the entrance of which we detected the ''Scagnel'' concrete stools that Italian designer Luca Nichetto dedicated to the area for tired BJDW visitors to rest their weary feet to be later used by local residents who may use them for a multitude of purposes, even including eating off them. It's worth mentioning that Nichetto has also completed his first ever architectural project in Asia: the Tales Pavillion at Beijing's Lido Garden, with a dynamic façade made of 1,200 brass tubes which hosts the new cutting edge showroom for China’s sole representative of world renowned brands including Foscarini, Ibride, Petite Friture, Diamantini & Domeniconi and Seletti.

Northeast of the Dashilar district, two equally important sites of Beijing Design Week showcased dozens of cutting edge projects by international and local creative minds (that required a lot of walking around their endless industrial grounds). The first one being 751 D-Park located next to the 798 Art District (where the famous Ullens Center for Contemporary Art (UCCA) is located), which hosted the 751 Intl Design Festival on the grounds of a former power plant. On that same spot, newly established Tongji University Press presented an exhibition of their brand new ''Luminous City'' series inside the carriages of a train, engaging two of China’s most acclaimed architects, Zhang Yonghe and Ma Qingyun. Some meters away, the ''Swarovski Digital Crystal'' landmark London exhibition was brought to Beijing where we were able to explore the concept of memory in the digital age inside a temporary black labyrinth designed by architect Ma Yansong of MAD Architects. The exhibition featured new works by both established and emerging Chinese designers with Naihan Li's Crystal Puzzle standing out. The other important BJDW site was CCD, the notorious Caochangdi Art Village on the city’s outskirts which hosts a self-motivated group of galleries. Infamous contemporary artists such as Ai Weiwei who moved from the US to China in 1999 has not only built a studio-house - his first architectural project - but has also designed a Red Brick complex of buildings housing galleries and artist studios which has upgraded the reputation of the entire village attracting more and more creative tenants to its grounds along the way. In one of its courtyards, we detected the CCD pavilion, a ground-breaking stage system equipment made of copper pipes and ceramic-vases as speakers by world-known contemporary artist Liu Wei, with the technical support of RAWR-Lab.

A little further afield from Dashilar, 751 and Caochangdi, we didn't miss the chance to see what was going on around the Chaoyang and Dongcheng districts. In the Sanlitun area of Chaoyang at the Nali Patio we discovered David Xing & Jack Xiang, the talented minds behind 'Make+' studio (å+) and their successful endeavours to design traditional furniture with different materials (their Translucent rammed earth divider and traditional Chinese chairs fabricated from Red Acryl were a great discovery). On 35 Mao’er Hutong in Dongcheng, inside the former house of China’s Last Empress located between Houhai Lake and Lama Temple and a breath away from the bustling Nanluoguxiang Hutong, we were bowled over by the enthusiasm of Isabelle Pascal, a French entrepreneur who moved to Beijing back in 2007. Driven by the ''5 Elements'' of Chinese philosophy {Wood (æ¨ mù), Fire (ç« huÇ), Earth (å tÇ), Metal (é jÄ«n) and Water (æ°´ shuÇ)}, Pascal created the ''WUHAO curated-shop'' in 2010 which showcases and fosters many of the most talented and eco-conscious Chinese creative minds ((Xiao Tianyu èå¤©å®, Su Chunrong èæ¥å®¹, Zheng Haichen éæµ·æ¨, Wang Kaichuan çå¯å·, Wang Hao çæ, Zhang Cheng å¼  æ¨, Huo Yi Jin éå¥è°¨,Wu Mian å´å to name a few). Unfortunately, as is often the case, beautiful things don't last forever and Pascal is searching for a new space in Beijing to house WUHAO after the government decided that she must leave her current space. That said, we’re sure that her passion and enthusiasm will lead her to the next best spot in the city and hope to discover her behind another traditional Chinese red door during BJDW 2014!

Like a lotus flower which has the ability to grow through mud, Beijing Design Week 2013 unveiled the potential of an evolving creative generation with the power to shake up the other side of the planet through a blend of collaborations between Asian and International talents. Despite the fact that there were days when it was literally impossible to breath due to Beijing’s notorious heavy pollution, talented immigrants, like the Italian, now Beijing-based curator and creative director of BJDW 2013, Beatrice Leanza, have brought their international expertise and a breath of fresh air to rejuvenate an entire creative community of local talents.  And it is elements and talents such as these that are sure to make Beijing Design Week an important event in design aficionados’ calendars for years to come.

Discover some of the above mentioned plus many other Highlights of BJDW 2013 through the pictures that follow.