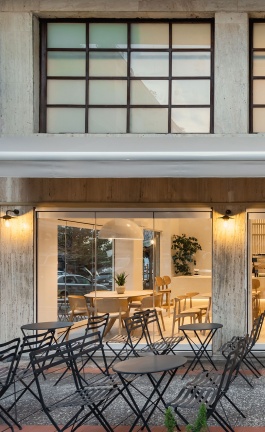 Located in a peaceful neighbourhood of Porto, Portugal, what this modest family house lacks in architectural éclat, it more than makes up for in its intricate spatial configuration, thoughtful use of natural light and unexpected detailing. Designed by Nadia Santos and João Francisco Sousa of architecture practice WeStudio and José Mendanha of architecture, design and engineering firm MADE, the one-storey house hides several surprises, from playful juxtapositions of patterns and textures, to several mezzanine levels, to numerous skylights. Add the humble yet sophisticated interiors and you have a house that embodies modern family living in its purest form.

A window-less stone wall lining the street hints at the building that once stood here but also marks a change of orientation: the house turns its back on Rua Direita de Francos where it takes its name from, opening up instead onto a private garden delineated by the new building’s L-shaped footprint, a simple yet clever layout that also neatly separates the private and communal areas. In contrast to the masonry façade, the newly-built elements, which include a gable roof, are clad in brickwork whose tidy geometry stands out against the stonework’s abstract forms.

Entering through a small courtyard located at the corner of the L-shape building, a vestibule leads to the open-plan living, dining and kitchen area on the south facing wing with four bedrooms located in the east facing wing. Taking full advantage of its orientation, the communal area is bathed in natural light thanks to wall-to-wall, floor-to-ceiling glazing. Thoughtfully, an overhang prohibits the summer sun to heat up the space while allowing the winter sunlight to warm it up.

The building’s new gable roof may echo the neighbourhood’s residential architecture but the design was nevertheless introduced for more pragmatic reasons, namely the creation of mezzanine levels which complement the main spaces. While the mezzanine space in the far end of the living room is used as a study, those in the bedrooms function as playrooms. Skylights ensure that there’s plenty of natural light throughout the house, including corridors, bathrooms and windowless mezzanines while offering a seasonal variation of sunlight accents.

Underpinned by clean lines, humble materials and muted colours, the interiors are a paradigm of effortless minimalism and unassuming sophistication. Echoing the house’s exterior which is characterized by the playful juxtaposition of stonework and brickwork surfaces, the interiors are designed as an interplay of concrete floors and white-painted walls. Finally, MDF surfaces in the mezzanines and the kitchen add yet another meticulously designed detail to this family house’s cleverly thought out configuration.