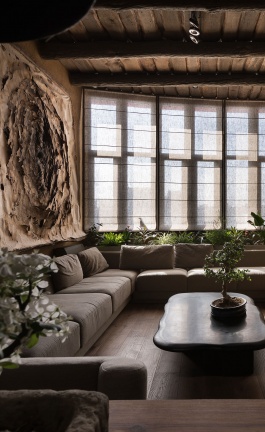 Imperfection is Beautiful: the Wabi Sabi Apartment by Sergey Makhno in Kiev, Ukraine

The Art of the In-Between: Rei Kawakubo’s Work at the Met

Since ancient times, imaginary creatures have had bodies that combine different parts from different animals, case in point, the griffin is a lion with an eagle’s head, the dragon is basically a lizard with wings, and the chimera is a lion with the head of a goat and the tail of a snake. In a similar vein of mythical collage, a jackalope is, for North Americans, a hare with antlers, the name being a portmanteau between a jackrabbit and an antelope. Now, one would not expect a luxury hotel and winery in Australia to pick the jackalope as its mascot — but Melbourne-based hotelier Louis Li did just that. The Jackalope Hotel is situated in Merricks North on Mornington Peninsula, an hour’s drive from Melbourne, and its concept, design and overall experience justifies its name in a number of whimsical and tasteful ways.

Surrounded by its own vineyards and on the site of an 18th century Federation cottage, the hotel incorporates the past but in a strong, contemporary design language that seeks to create a visual statement but without disturbing its natural environs. Designed by Carr Design Group, the hotel appears as a large monolithic structure from afar, covered with charred wood and a black metal skin that prepares approaching visitors for the superior service and mysterious concept within.

Indeed, the entire hospitality experience revolves around the idea of alchemy, and how different ingredients can be mixed to create something new and precious. This mystical pursuit is of course embodied in the image of the jackalope, whose magical nature is celebrated with a seven-meter-tall sculpture by Emily Floyd and UAP — a black toy-like form that greets visitors at the hotel’s front entrance. Eclectic art and design are the cornerstone of the Jackalope experience, with furnishings designed by Zuster, and additional installations by local artist Andrew Hazewinkel and international fashion legend Rick Owens commissioned especially by the hotel.

The hotel’s 46 rooms range from 38-square-meter “Terrace” studios with outdoor views to 85-square-meter “Lair” suites that include a kitchenette and their own dining area. Black and grey dominates all the interiors, illuminated with shiny details of gold, silver, bronze and copper. The all-black background also functions as a neutral canvas for the several art installations and signature design pieces scattered throughout the hotel, such as the golden Leather Works armchair by Edra. In the rooms, black Japanese-style soaking bathtubs promise many hours of relaxation, based very much on environmental responsibility, as the Jackalope collects rainwater in seven large tanks, as part of efficient sustainability strategies integrated into the design right from the start.

Its impressive location and comfort aside, the hotel is also a dining destination in its own right, with a fine dining restaurant and a cellar door offering unique gastronomic experiences. Doot Doot Doot, the hotel’s restaurant, offers a gourmet dining experience that focuses on the tastes and smells of the land, while the more minimal Rare Hare wine bar showcases Jackalope’s own wine production. Both restaurants are under the direction of Executive Chef, Guy Stanaway, and take advantage of the hotel’s location right in the heart of Mornington Peninsula’s wine region. As in the rest of the hotel, Carr Design Group made sure that guests could enjoy the amazing views outside, and coordinated furniture, materials and finishings to match the subdued atmosphere and eclectic vibe of the overall design. Meanwhile, at Flangerdoot bar, an illuminated installation with large jars creates the mystical atmosphere of an alchemist's laboratory. For dining al fresco, the hotel also has a private pool deck with a 30-meter infinity pool, where guests can have a bite while lounging on black sunbeds under black parasols, facing the endless rows of vines covering the hills surrounding the hotel.