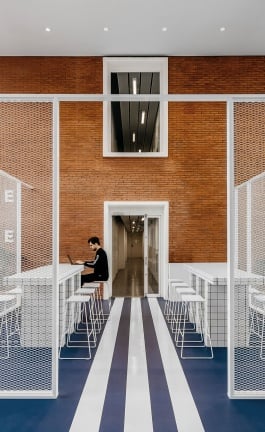 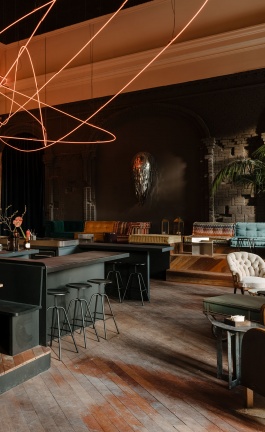 Housed in a former hospital in the centre of Hiroshima, Japan, KIRO HIROSHIMA by The Shared Hotels is a pared-down boutique hotel that swaps extravagance for authenticity, and luxurious amenities for human connection. With a wealth of attractions to explore, from the nearby Hiroshima National Peace Memorial Hall and Atomic Bomb Dome, to the surrounding islands in the Seto Inland Sea, the hotel was conceived as a crossroads where guests interact with the locals and learn about the “real” Hiroshima and surrounding region - hence the name Kiro which in Japanese means crossroads.

Taking a cue from the city, whose modernity is interweaved with the indelible scars of the past, Tokyo-based Hiroyuki Tanaka Architects have adopted an “archaeological” approach in converting the building into a hotel, introducing new elements while preserving large parts of the original building’s fabric. Underpinned by a minimalist aesthetic and a sense of craftsmanship, old and new are seamlessly combined in ascetic elegance.

The architects’ unique approach in renovating the building can be seen in the third-floor bar and lounge area which occupies the former hospital’s rehabilitation pool. Aptly named “THE POOLSIDE”, the area also includes an adjacent shared kitchen and laundry space that exemplifies the hotel’s communal ethos.

Rather than building over the pool, the architects have preserved its sunken form converting it into a sitting area. Preserved sections of the original building’s structure are harmoniously combined with new concrete surfaces, while original features like white pool tiling and steel ladder steps are mixed with leather upholstery and sleek wooden furniture. A muted palette of white and grey is complemented by natural wood, warm brown tones and lush vegetation creating a soothing ambience that channels the wellbeing aspect of the space’s original atmosphere as a rehabilitation facility, which the team explains, “we tried as hard as possible to maintain.” With ample natural lighting flooding in from the curved window structure enveloping the space, the lounge area is the perfect place for visitors to socialize with other guests.

The monastic aesthetic of the lounge extends to the rest of the public areas as well as the compact guest rooms. Designed for “travellers who want to meet others at the bar and lounge”, the guest accommodations ranges from twin and triple rooms, to loft-style rooms with bunk beds and Japanese-style rooms with mattresses on raised platforms, making the hotel ideal for families and groups of friends. What the rooms lack in spaciousness, they more than make up for in craftsmanship, with a series of sleek, wooden furnishings that warmly complement the muted colour palette. So while the interiors’ polished austerity undoubtedly reflects traditional Japanese design aesthetics, it ultimately reminds guests that beauty lies beyond the hotel’s walls.