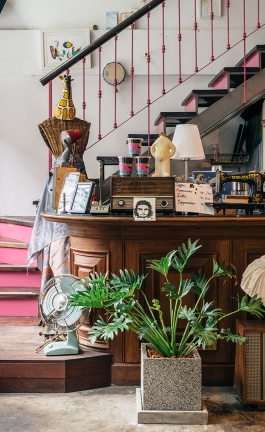 Architecture, Graphic Design & Art Converge in a Restaurant of Intuitive Eccentricity in Bangkok 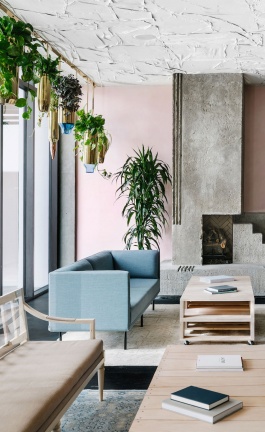 The LINE Hotel Revamps a Modernist Landmark in Austin

The Mediterranean island of Ibiza, Spain, may be renowned for its frenzied club culture and cosmopolitan sophistication but people tend to forget that the island is also a place of spectacular natural beauty, where beaches and dunes meet pine covered hills and rocky cliffs, and that it also features an immaculately preserved coastal fortress as well as a rich local culture. The traditional peasant dance, ball pagès, where the island’s women, bedecked in handcrafted jewels of gold, silver and coral, are ceremoniously invited by the men to join them with a click of their castanets, may seem worlds apart from the packed dance floors of the renowned Pascha and Amnesia nightclubs but it hints at Ibiza's deeper allure: the freedom to live and let live in a place where contrasting trends and attitudes harmoniously co-exist.

A new book by Anne Poelmans, “Life is Ibiza: People. Houses. Life.” published by Lannoo Publishers, aims to capture Ibiza’s magical allure through the people that have made the island a home away from home, and their extraordinary houses that have made it a hot spot for contemporary architecture. Anne’s 35-year-old love affair with Ibiza goes back to her childhood summers and her genuine passion for the island’s sensibility is undisputedly evident in the book’s 200 pages of stunning views, breath-taking architecture and gorgeous interiors.

Since the sixties, the combination of Ibiza’s picturesque setting and spirit of tolerance and generosity have attracted intellectuals, artists, hedonists and nonconformists while the freedom and anonymity that it offers is a magnet for the world’s rich and famous. This diverse group of visitors, many of whom, like Anne, grew permanent roots here, have transformed the island into a modern utopia not only due to their laissez-faire, stylish lifestyle but also by the dream houses they have built. Fashioned into a multitude of architectural styles that range from the traditional Ibizan peasant houses to modernist feats of minimalism, the glorious villas that begun being built in the nineties attest to the island’s role as a source of creativity and inspiration.

Long before it became the dream setting for architects the world over, the island’s centuries-old rural houses, known as fincas, had been the object of study and fascination, foremost in the work of Canadian architect Rolph Blakstad who settled here in 1956. Their stripped down aesthetic and ingrained functionality, which are typically made up of white-washed, single-story cubic modules of different sized arranged around a porch, inspired Blakstad who incorporated their traditional building techniques and materials into his modernist designs. Exemplified by a minimalist simplicity, symmetry and a limited visual impact on the Ibizan landscape, the houses that Blakstad built on the island have been inspiring architects for fifty years now.

Blakstad’s influence can be seen in a several homes featured in the book, from the white-washed, subdued monumentality of “Can Caterina” by architect Cate Watts, to “Can Lauren” whose terracotta-coloured exterior draws from the Moroccan kasbah while its all-white interior adheres to a more Ibizan sensibility.What stands out the most however are the villas that fully embrace their natural surroundings like “Casa Alegre” by Fernando de Castro of Ark International Studio. Taking the sea as his starting point, Castro has designed all the Casa’s spaces to enjoy sweeping views of the Mediterranean which seamlessly flow onto the exterior terraces and balconies. Combined with the minimalist aesthetic of the interiors, a collection of mid-century furniture and an eclectic selection of artworks, the house is the epitome of high modernism.

Eschewing the rectilinear austerity of projects like “Casa Alegre” and the equally minimalist “Casa Viddal & Rahola” by Rahola Vidal Arquitectes and “Can Nou” by Bruno Erpicum of architectural firm AABE, the house of philosopher and architect Rudolf Steiner exudes a volumetric sensuality by fusing a brutalist use of concrete with an expressive use of natural materials. Discretely following the contours of the landscape, the 1,600-square-metre house features large windows with bamboo shutters, rough natural stone floors, a crisscrossing network of curved paths and stairs, and a creek connecting two swimming pools.

The book also showcases some beautiful renovation projects such as “Can Basso” in the rural area of Santa Eulalia, a 300-year-old finca whose authentic character has been meticulously preserved, and “Casa Dalt Vila" in Ibiza’ old town, which eschews the minimalism of most contemporary interiors for a charming eclecticism that combines French empire-style chandeliers with sculptured Indonesian planters and hand-embroidered Afghan cushions with classic white cotton chairs. What the house lacks in scenic views, it more than makes up for by the hanging gardens in the sitting room and the lush vegetation that takes over the courtyard, an evocative reminder that Ibiza is above all else a magical state of mind.