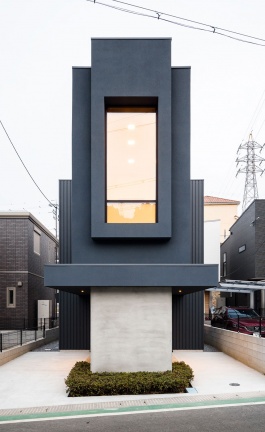 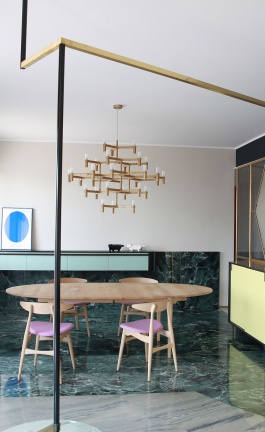 Located on a leafy road in Kensington, London, this recently renovated Victorian terraced house stands out in its radical approach to inhabiting historical housing. Thoroughly reconstructed in response to the need for increased daylight and spatial fluidity by London-based practice FLOW Architecture in collaboration with London-based architect MAGRITS, the renovated building may look the same from the outside but revels internally in contemporary sophistication. Centred on sculptural light well that ushers daylight deep into the building’s core, hence the residence’s name “Light Falls”, the dwelling smoothly unfolds on five floors, including a new basement and a double-height rear-extension, comfortably catering to the client’s laidback living requirements, minimalist sense of style and growing art collection.

Originally built in 1851, the four-storey, end-of-terrace house exemplified Victorian residential architecture in its compartmentalised layout and poor quality of natural light. Faced with such conditions, the design team set upon completely reconfiguring the internal layout keeping only the street facing façade intact in line with the area’s planning restrictions, which in effect meant demolishing the building and reconstructing it literally from scratch.

At the centre of the building, the architects have incorporated a slender light well extending down to the raised ground floor and an open staircase that goes all the way from the upper floors down to the lower ground floor and the new basement below, both of which have been conceived in sculptural terms and crowned by large frameless skylights. These two bold gestures enhance the fluidity of the vertically stacked living spaces and allow natural light to percolate throughout the core of the building as reflected in the project’s name. “The name Light Falls perfectly expresses the soul of the house”, explain the design team, “the cascading effect of daylight, brought in vertical motion to the centre of the building, enlivens the interior spaces and dissolves the borders between outdoor and indoor spaces”.

The central core is complemented by a series of double-height spaces that further integrate the living spaces on the three lower floors of the building while the vertical perforations seamlessly incorporated into the light well offer unexpected visual connections between the bedrooms on the upper floors and the rest of the house. Visual connections between indoors and outdoors also abound, centred on an all-glass extension featuring panoramic sliding doors connecting the dining area and living room above with the terrace and garden on the back of the property.

Echoing the sculptural geometry of the light well and staircase, the gently curved terrace accommodates a large walnut tree that dominates the landscaped garden, as do the organically shaped planters and serpentine footpath.

Underpinned by a minimalist aesthetic of fluid lines, both the exterior spaces and the house’s interiors appear as if they have been sculpted rather than built, the result of combining traditional construction methods with more innovative solutions. Examples of the latter include the glass-reinforced concrete panels that clad the terrace walls, and the series of bespoke joinery pieces throughout the interior that were designed with special cut-out handles and engraved with graphic designs. A combination of gently curved, smoothly rounded and rectilinear white-washed surfaces further enhance the house’s sculptural sensibility while hardwood flooring and timber cladding subtly imbue the rooms with warmth. More than that however, the seamless fluidity and sculptural minimalism of the renovated residence just goes to show that renovating historical housing need not be incompatible with contemporary design.