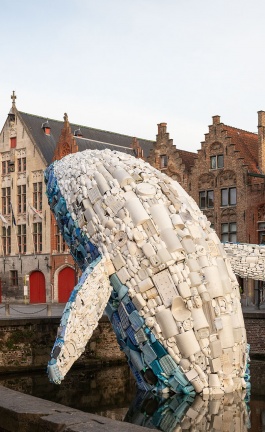 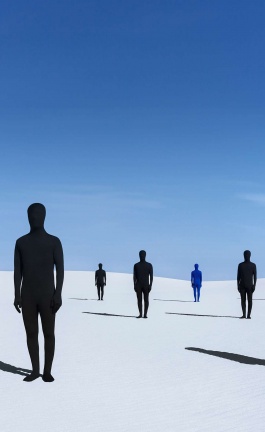 Expansive and futuristic, Loft Panzerhalle designed by Vienna-based architectural studio Smartvoll nevertheless manages to embrace its industrial heritage. Built in the 1930s as an army barracks and tank station, the 200-metre-long Panzerhalle in the western district of Maxglan in Salzburg, Austria, was transformed in 2013 from a brick shed into a multi-purpose venue comprising a large market hall, a restaurant, a spa facility, and co-working spaces, as well as a handful of extraordinary lofts such as this one. The 350-square-metre residence, which Smartvoll won an international competition to renovate, unfolds as a single spatial experience of sculptural boldness, minimalist elegance and luxurious comfort, crucially without completely effacing the building’s history.

At the centre of the 8-metre-tall loft, a concrete bifurcating staircase has been cast in-situ as a sculptural gesture of futuristic sleekness. Two sweeping sets of steps meet at a central landing, gracefully branching out to reach the upper floor, which miraculously seems to be supported by the slender structure. The smoothed and waxed concrete of the staircase core extends to the loft’s floor and ceiling, bestowing upon the entire space a sense of fluid, sculptural integrity, which is vividly juxtaposed with the building’s exposed brickwork that covers the lateral walls.

Running at right angles with the elongated staircase, a 7-metre-long multifunctional kitchen counter stretches between two terraces in the middle of the space representing yet another bold design gesture that stands in both volumetric and tonal contrast with the curvaceous concrete structure arching over it. Made from black lava stone and featuring a planting area where herbs can be grown, it serves as a cooking, eating and working area, while also notionally dividing the open plan layout, in conjunction with the staircase, into a living room, dining area and lounge.

On the upper floor, a ribbon like gallery allows the glazed perimeter to flood the entire loft in daylight, only widening at the ends to house the private quarters. In order to maximize the amount of natural light and retain the sense of spaciousness, the architects have relied on translucency to ensure privacy for the master bedroom (white curtains), guest room (frosted glass) and reading area (open-ended bookcase). The only truly enclosed space on the mezzanine level is the bathroom, although even here the architects have innovated by designing a protruding glass shower cabin that hovers four metres above the ground.

The bathroom’s concrete volume extends to the lower floor where a wellness area is housed. Conceived as a private retreat, it features a large bath, a sauna and a shower encased in a faceted design of quadrilateral and triangular timber-lined surfaces. The spa’s meditative ambience is shared by the loft’s two terraces, one of which has been designed as a “Zen garden” where a jasmine tree grows out of a small earth mound that appears to spilling out of the building fabric, as is fitting with Smartvoll’s visionary design of sculptural audacity.