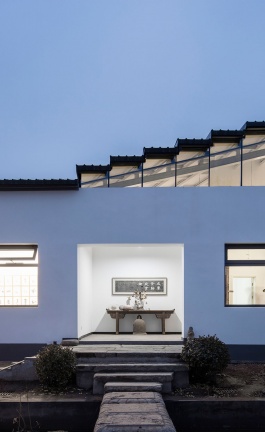 Gregory Melitonov, co-founder, along with Ines Guzman, of Taller Ken architecture once said: “You need the artistic weirdos.” The occasion of his passionate statement was Taller Ken’s New Practices New York 2016 award, presented by the New York Chapter of the American Institute of Architects. His words were celebratory of a culture of experimentation and challenge, which is evident in the work of Taller Ken which is itself a youthful enterprise, playful enough to be irreverent, but internally respectful to the high art of architecture so as to safeguard the aesthetic evolution of form, even –or especially– as it seeks out new ways to subvert established perceptions.

Taller Ken (“Taller” in Spanish meaning workshop or studio, and “Ken” meaning perception, understanding) was born in 2013, out of Melitonov and Guzman’s acquaintance at Renzo Piano’s Building Workshop. Consistent with his philosophy and practice of hiring young architects from all over the world, the renowned Pritzker-winning architect included Melitonov and Guzman in the team working on the Whitney Museum of American Art’s new location in lower Manhattan, next to the prolifically Instagram-able High Line park, whose maintenance and operations building was also designed by Piano’s workshop. In 2012, Mendez went back to Guatemala, and Melitonov stayed in New York. Following a period of freelance collaboration, they opened Taller Ken in both cities in 2013.

It is in Guatemala that Saúl Bistro’s Madero venue gives Taller Ken an opportunity to showcase its carefully crafted whimsy, where, overlooking a busy highway, a 49-foot-tall structure takes the street traffic and immobilizes it in a sculpted exterior of cut-up car chassis. To a great extent, it represents the most appealing interpretation of an asphalt jungle par excellence: The parking space, in a black-and-white zebra-like motif, also elegantly signifies the (zebra) crossing into a different space. Inside, the space is set up as a tropical sanctuary, filled with colours, plants and light. It almost looks like an industrial space made in the Play-Doh factory, half-innocent, half-strict where the floors burst with colours from the hand-made tiles in various shades of green and red, and the tropical planting, rising up in different parts of it, are watered by rainwater which is collected through the roof into bright blue tanks. The furniture, which is also brightly coloured, harks back to a world a few decades back, as suggested by the cars that are used even in the building’s interior design.

The exposed steel framework and the plumbing, along with the high skylights play with the inside-outside borders, providing a space concealed but not confined –a point stressed by the patio furniture in the middle of the hall. At the same time, the tropical vegetation, that even drapes the lighting fixtures, highlights the pastiche of colours and the blending of a natural and constructed environment, as the latter finds its expression in the automobile.

Saúl Bistro’s Madero venue is a diner, a parking lot and a destination for urban safari enthusiasts. Rather than cars per se, it is a celebration of what drives progress forward. And in architecture, as in all art, the drivers of progress are quite often the “artistic weirdos”.