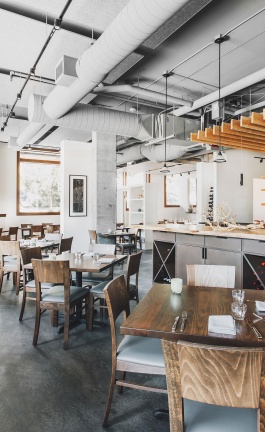 Copine Restaurant by Olson Kundig Architects near Seattle’s downtown, US

Conversion of the Former Hospital of Meursault

One of the initial gratifying experiences with a glass of wine is holding it against the light, finding in its hue and its density traces of how and what it came to be. In Meursault, the Bourgogne commune in the Côte de Beaune, the city’s former hospital is bathed in such light, as it stands secluded from other structures in the area. In a region famous for its white wines, as well as a minor production capacity of reds, the building provides a white counterpoint to the bright blue sky and the fruitful green of the different climats that make up the commune’s vineyard territories that have been classified by UNESCO as World Heritage sites.

The hospital was founded by Hughes II, Duke of Burgundy, at the beginning of the 12th century. While its name, the “Leprosarium”, betrays its function as a medical hostel for those afflicted by leprosy, it also cared for the indigent, as well pilgrims and soldiers. In the 18th century, by order of King Louis XV, the monastery-administered hospital became associated with the Hospices of Beaune. Through the centuries, the buildings in its cluster have been used as a hostel, a coach house, and an agricultural farm, before being enlisted in the French Historic Monument Society’s Inventory in 1926. After acquiring the buildings in 1990, the Meursault municipality set out to incorporate them into the profile of the commune’s status as the host of the UNESCO valorized climats, resulting in the site being reworked to highlight its own architectural lineage, as well as the formative and cultural interplay with its surroundings.

A result of the creative efforts of Jung Architectures, Frédéric Jung’s Paris-based architecture studio which has rightfully found itself a niche in the renovation of buildings towards changes in their function, the present-day iteration of the Meursault hospital is a touristic hub, an entry point to the region’s most distinct character. The three buildings of the hospital, the Gatehouse, the Poor Hall and the Chapel, have been repurposed to host Meursault’s tourist information office and its exhibition spaces.

Extensive archaeological excavations have been matched by laborious restoration works to provide for an outcome that can confidently claim to be true to the history of the landmark. As the buildings only partly retained their original layout, having seen successive additions and destructions through the ages, to assume original volumes could prove aesthetically hazardous. Instead, the site was deconstructed into its defining elements of frameworks, openings, levels, and so on, to allow for their use anew, highlighting the surviving features, and reinterpreting them in contemporary means.

The Burgundy stone building is coupled with glass, sculpting natural and artificial light. In the daytime, the progressively larger windows invade the building with ease, while at nighttime the stone reflects an almost regal glow. The extension added to the structure, providing for one of the exhibition and wine-tasting spaces is lined with wooden panels on the inside, though its distinguishing feature is definitely its exterior, covered in Azengar zinc, chosen for its tonal coherence in regards to the Burgundy stone.

So while it is probably safe to say that the Meursault hospital hadn’t aged like fine wine, it looks like it has now come into its own, and will reflect the grandeur of its surroundings and heritage.

In the daytime, the progressively larger windows invade the building with ease, while at nighttime the stone reflects an almost regal glow.