Simply Great: an Apartment in Helsinki by Laura Seppänen 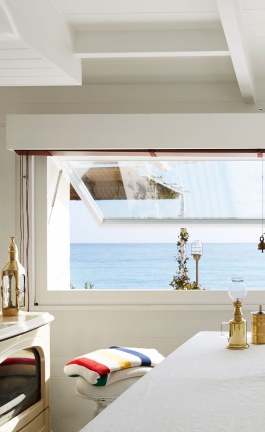 Setting Sail: The Nautical Luxury of a Mediterranean Cabin on the Italian Riviera

Once the epicenter of the shad fishing industry, Philadelphia’s Fishtown has recently evolved from a working class neighborhood into an up-and-coming harbor which is seeing a fair amount of artistic, culinary and musical action. Case in point, Wm. Mulherin’s Sons, a new restaurant and boutique hotel serving an Italian-inspired, wood-fired cuisine that takes both its name and its vintage aesthetic from the 100 year old whiskey blending and bottling factory that it occupies.

Constructed in 1890, the three-storey landmarked building was the headquarters of the eponymous whiskey company William J. Mulherin, who, as an Irish immigrant, started the company along with his sons; the company thrived until 1925 when it was shut down due to the Prohibition. Left abandoned ever since, the venue was thoroughly renovated by Philly-based Method Hospitality, in collaboration with architect Richard Stokes, opening its doors to the public last year. Meticulously adhering to the building’s historical character, the design has preserved many features from the original décor, both externally and internally, such as the terra-cotta exterior signs, arched windows, interior millwork and safe.

The restaurant, located on the ground floor, is comprised of three distinct spaces: a daylight-filled, wood-paneled bar area sporting a speakeasy atmosphere, a cozy dining room complete with dark hardwood floors and fireplace, and a second dining area overlooking the wood fired oven. Complementing the original building’s features, the designers have added elements that hark back to the building’s heyday—with many, like the worn-leather armchairs and the glass-sphere pendants, were acquired from local antique markets—as well as elements that allude to its industrial past such as the exposed brickwork, visible duct-works and the aforementioned cast concrete fireplace.

With a check-in system inspired by traditional English pubs whereby guests get in touch with the restaurant staff in lieu of a reception, and an Italian-inspired menu by Chef Chris Painter that focuses on pizza and other wood-fired fare complemented by an eclectic selection of cocktails and craft beers, Wm. Mulherin’s Sons provides a homey, convivial service that perfectly reflects the rustic-cum-urban atmosphere of its historical setting.