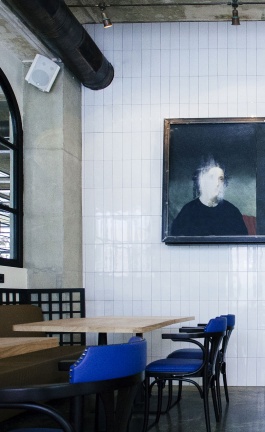 The New Strada Restaurant and Café in Tbilisi, Georgia by ROOMS 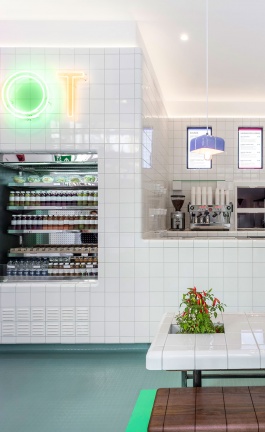 ‘Merdacotta is the new terracotta’ would be a fitting subtitle for The Shit Evolution, an exhibition by Museo Della Merda in collaboration with Società d’Incoraggiamento d’Arti e Mestieri (SIAM). Co-produced with 5Vie Art + Design and held in SIAM’s Milanese palazzo during this year’s design week, the exhibition introduced the Museum’s first product range: a collection made out of Merdacotta, a material consisting primarily of dry cow dung.

The Shit Museum is the brainchild of Gianantonio Locatelli, owner of Castelbosco dairy farm in the Italian province of Piacenza and strong proponent of sustainability. Waste from the farm’s cows is reused to produce methane (a biofuel used for heating), fertilizer and raw material for plaster and bricks. The Museum, established as a joint effort with architect Luca Cipelletti—the Museum’s designer and creative director—Gaspare Luigi Marcone and Massimo Valsecchi, and housed in the ground floor of the late-medieval castle of Castelbosco, is in essence a paean to shit that explores its value in historical, scientific and artistic terms. From ancient Egyptian amulets depicting the dung beetle, the Museum’s symbol, and examples of the use of excrement in architectural constructions to the latest scientific research projects and artistic endeavours, it becomes clear “what a useful and living substance crap really is”.

Taking the recycling of shit a step further, the Museum has created a product range that was showcased in SIAM along with a selection of other works from the Museum. Made out of Merdacotta, a mix of dry cow dung, straw, farm waste and Tuscan clay, and combining a rustic, earthy aesthetic with elemental, geometric forms, the product range consists of flowerpots, vases, tiles and tableware—the latter rendered suitable for contact with food and drink through the use of a transparent glaze. The collection is also complemented with four hand-made decorative items.

Curated by Cipelletti, Shit Evolution began in SIAM’s courtyard with a staged dining room scene, using the product range’s “Shit Giga Brick” as a low table and four “Shit Cubes” as stools—accompanied by a “Shit Toilet” standing on an island of “Hexagonal Shit Tiles”. The exhibition continued in the basement level, where remnants of Roman walls and an earthen floor provided the ideal setting for the rest of the products and exhibits. Amongst other things, visitors had the opportunity to see paintings by Robeto Coda Zabetta - who mixes dung from the Castelbosco farm with tar and oyster pigment to paint his canvases, a television set showing Daniel Spoerri’s Resurrection video, a story of a poo that becomes a steak, and a pyramid of six large Medracotta cans, handmade in a limited edition of 90, a homage to avant-garde artist Piero Manzoni whose 1961 “Artist’s Shit” consisted of 90 tin cans filled with excrement. Coming full circle, the show concluded with another dining scene—this one more intimate featuring two "Shit Toilets" as seats—reminding us of the virtuous circle of nature, a process of recycling and rebirth.