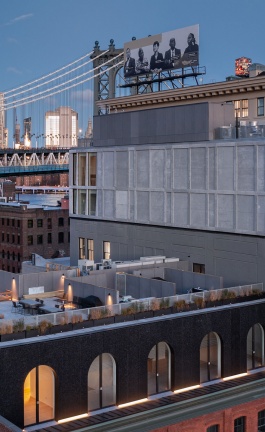 Commissioned to transform a drab apartment block into a modern guesthouse in Nantou, an inner-city neighborhood in Shenzhen, Shanghai-based architecture studio Neri & Hu drew inspiration from the area’s chaotic urbanization, bustling energy and unvarnished authenticity, designing the building as a dynamic interplay of existing and new elements in dialogue with its lively surroundings. Comprising five floors of guest accommodation, plus a ground floor restaurant and a rooftop bar with sweeping city views, the renovated building nostalgically looks back to its humble origins whilst boldly proclaiming its modernity, celebrating life in what have come to be known as China’s “urban villages”.

Once a walled enclave, the ancient city of Nantou has since been absorbed by the metropolitan sprawl of Shenzhen, a phenomenon called cheng-zhong-cun or 'urban village', without however losing its humble character. Surrounded by downtown Shenzhen’s glimmering skyscrapers and fast-paced highways, Nantou is a densely packed neighborhood of tight-knit alleys, makeshift gardens and intimate squares filled with local residents, street hawkers and children playing outside. While there are very few remnants of its 1,700-year history left - most of the town’s ancient stone houses now replaced with concrete low-rise buildings - the area nevertheless is imbued with a nostalgic sense thanks to its resistance, so far, to Shenzhen’s fast-paced, consumerism-driven urban development.

Guided by Russian-American scholar Svetlana Boym’s writings on the topic of “reflective nostalgia” which, as she wrote, “dwells on the ambivalences of human longing and belonging and does not shy away from the contradictions of modernity”, Neri & Hu have channeled Nantou’s diffused sense of nostalgia into their adaptive reuse of the building. This is most apparent in the contrast between the building’s concrete structure - which has been left exposed throughout the premises - and the new metal staircase that extends all the way from the ground floor to the rooftop. Painted black to contrast with the surrounding concrete, the staircase is interwoven with the concrete shell in a sculptural tangle, echoing the disorderly urban fabric of the neighborhood.

The metal staircase is suspended inside a new atrium that has replaced the original stairwell. Featuring new openings, or “urban incisions” in Neri & Hu’s words, which offer views of the neighborhood as you ascend and descend, and a new skylight bringing in additional natural light, the enlarged, light-filled stairwell has been designed as a vertical extension of the side street where the building’s entrance is located. Similarly, the ground floor restaurant was conceived as an extension of the adjacent public square, with a glass façade now blurring exterior and interior.

The insertion of a new atrium is just one of three bold interventions, the other two being wrapping the building block in perforated metal bands and adding a new rooftop level. Alluding to the notion of urban layering, the perforated façades advertise the building’s new modern incarnation without effacing its humble origins, while the addition of two minimalist designed monolithic volumes on top of the building, inspired by vernacular architectural forms, further brandish the interconnectedness of past and present.